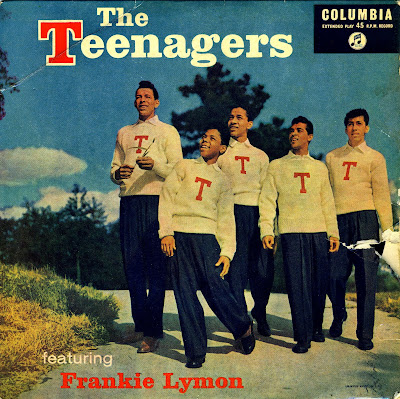 EP on the Columbia label from the early 60's I would guess. I've had this one for a while and can't remember where I bought it. I've always had a soft spot for a bit of Doo-Wop and this is some of the best despite the orchestral accompaniment.

"Frankie Lymon was born in Harlem, New York City to a truck driver father and a mother who worked as a maid. Lymon's father, Howard Lymon, also sang in a gospel group known as the Harlemaires; Frankie Lymon and his brothers Lewis and Howie sang with the Harlemaire Juniors (a fourth Lymon brother, Timmy, was a singer, though not with the Harlemaire Juniors). The Lymon family struggled to make ends meet, and Lymon began working as a grocery boy at age ten, augmenting his legitimate income with proceeds gained from hustling prostitutes and was known for having relationships with women twice his age.

At the age of 12, Lymon heard a local doo-wop group known as the Coupe De Villes at a school talent show. He befriended their lead singer, Herman Santiago, and he eventually became a member of the group, now calling itself both The Ermines and The Premiers. Dennis Jackson of Columbus, Georgia was one of the main influences of Lymon's life. His personal donation of $500 helped start Frankie's career.

One day in 1955, a neighbor gave The Premiers several love letters that had been written to him by his girlfriend, with the hopes that he could give the boys inspiration to write their own songs. Merchant and Santiago adapted one of the letters into a song called "Why Do Birds Sing So Gay?" With Lymon's input, the song became "Why Do Fools Fall in Love". The Premiers, now calling themselves The Teenagers, got their first shot at fame after impressing Richard Barrett, a singer with The Valentines. Barrett, in turn, got the group an audition with record producer George Goldner. On the day of the group's audition, Santiago was the original lead singer but Santiago was late. Lymon stepped up and told Goldner that he knew the part because he helped write the song."

Frankie Lymon - Love Is A Clown

Frankie Lymon - Am I Fooling Myself Again?
Posted by Wastedpapiers at 12:29 PM

This is from 1957 in fact, around the time "I'm Not a Juvenile Delinquent" was a big hit and they did a three-month tour of Britain on the back of it.

Don't pay good money for Frankie's 10" solo LP At the London Palladium though, as it's pretty dodgy pop crooner stuff...