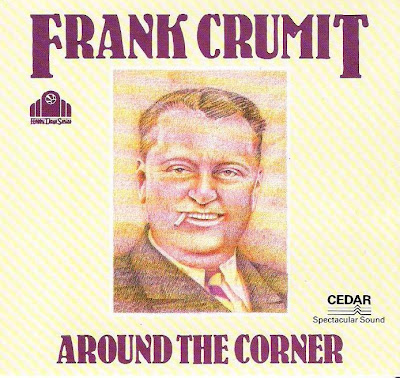 "b. 26 September 1889, Jackson, Ohio, USA, d. 7 September 1943, Longmeadow, Massachusetts, USA. Crumit's early career took a somewhat unusual route from the Culver Military Academy, Indiana, via the University of Ohio, into vaudeville as the One Man Glee Club. First recording in 1919 for the Columbia label, he later signed for Victor Records in 1924 and shortly after for Decca. Crumit played the ukulele, sang in a soft, warm voice, and was especially noted for his performance of novelty numbers, such as A Gay Caballero, Abdul Abulbul Amir (and the follow-ups, The Return Of… and The Grandson Of . . .), The Prune Song, There's No One With Endurance Like The Man Who Sells Insurance, Connie's Got Connections In Connecticut, Nettie Is The Nit-Wit Of The Networks and What Kind Of A Noise Annoys An Oyster?. He is supposed to have written thousands of songs and adapted many others such as Frankie And Johnny and Little Brown Jug to suit his individual style. Crumit enjoyed great popularity throughout the '20s and '30s, appearing in several Broadway shows, including GREENWICH VILLAGE FOLLIES. He also appeared in TANGERINE with his future wife, Julia Sanderson. They married in 1927 and retired from show business for two years. Following their comeback in 1929, they were extremely successful together on radio in the '30s as the Singing Sweethearts, and in 1939 began THE BATTLE OF THE SEXES game show which continued until Crumit's death in 1943."

Frank Crumit - Nettie Is The Nit-Wit Of The Networks

Frank Crumit - King Of Borneo
Posted by Wastedpapiers at 7:16 AM

Just come across your blog by doing a sarch on adge cutler....very groovy indeed mate.....great idea

Me and my lover can be found at www.forgirlswhocantdofootball.blogspot.com

Thanks Anon. Much appreciated - nice to get the occasional feedback. It encourages me to add more stuff.