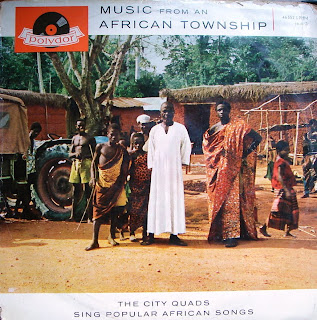 I can't believe I haven't uploaded some tracks from this LP before. Its one I found at Brick Lane flea market many years ago for a few pence. Its on the Polydor label and made in what was Rhodesia and is now a troubled Zimbabwe. Sleeve printed in Germany. No date but imagine it would be late 50's or early 60's.

No info. on the internet so just a little information on the sleeve notes.

" Polydor presents a unique collection of popular African tunes sung ina variety of native languages by one of the best known vocal groups in Rhodesia, The City Quads. The performance you hear on this LP could be called a mixture of African folklore and pop songs of a kind one is always likely to hear wherever people gather together in an African township."

The music in particular-

LINDEA - (sung in Shona ) Love songs are always popular, and this one is a most tender example.

LIZOFIKANINI LANGA - (sung in Sindebele ) This is a sort of non-political spiritual and tells of an oppressed people's longing for the day when they will be free.

IDALALAKECE - (sung in Sindebele ) Now we have a gay wedding song. There is much shouting and cheering because the young girl is to be married.

BALELE EYAYA - (sung in Sindebele ) This is a son g about a policeman who is alays pounding the beat and writin g in his little book, but who never has time to write home to his family.

LA MULELA - ( sung in Xhosa ) Here we have a song about animals fighting; "unless they are broken apart one of them will have his tail cut off!"

RUDO - (sung in Shona ) The lyrics of this song say: "There couldn't be anyone better than you. Your love haunts me even when you are not there."

NYATELU UGIHILE - (sung in Xhosa ) Another wedding song. Here we are told it is customary for a girl to sing the first song.