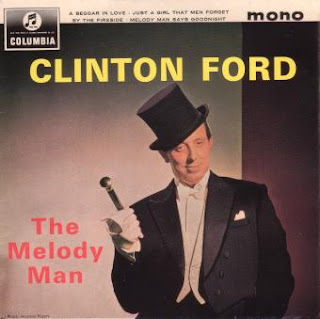 Clinton Ford, whose real name was George Harrison strangely enough was born in 1931 in Salford near Manchester in the North West of England.
"Clinton will now be best remembered for his novelty song, "Fanlight Fanny"- a recording he made while he was with Oriole, a minor label which had association with the Woolworth's budget record brand, 'Embassy'. In fact Clinton Ford was one of Oriole's most successful artists for a while, and "Fanlight Fanny" looked like Clinton's break into the big time. Sadly, it never quite happened.

Clinton Ford - What A Little Moonlight Can Do

Clinton Ford - Huggin' And A Chalkin'

Clinton Ford - My Little Bimbo
Posted by Wastedpapiers at 3:54 AM

I think more than anything else, I like the daft titles. 'Where Did Robinson Crusoe Go With Friday On Saturday Night' is just so weird and funny.

Hi there, i came across your blog whilst searching for mp3 of bobby thompson, which i see you had posted in the past http://bootsalesounds.blogspot.com/2008/05/bobby-thompson-little-waster.html, is there anyway you could send me a copy of this, i need it for a compilation cd i'm putting together for a aunties funeral, she was a big bobby fan and it would give us all a bit of light relief on the day to hear some bobby thompson. Anyway be great if you could help out.
ian@irisprint.co.uk
many thanks

Thanks all for your comments.
Sorry iyorke- Not sure where the Bobby Thompson LP has gone. If I find it I will happily send you a an MP3 but it might take me a while.

Hi There,
Is there any way i could get a copy of Clinton Fords (Fanlight Fannys Daughter)It was my dads favourite and would bring back some really good memories.
Many Thanks.
Ricky Langton.
ric2011@hotmail.co.uk

Thanks for the enquiry Ricky but not sure I have the song you want. Not even sure where this Clinton Ford LP is now! If I find it I will certainly re-up.