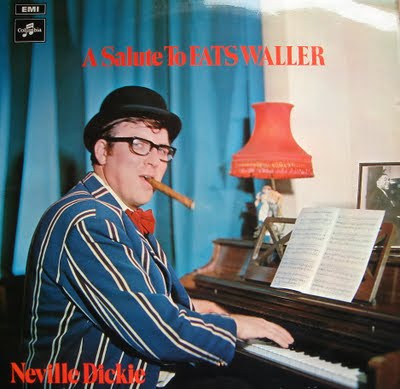 I found this at the boot sale recently and attracted immediatley by the cover. I love Fats Waller anyway so wondered what Neville had done to these great old tunes. Turns out he did a pretty good job despite no vocals. Certainly better than most "honky tonk" style pub pianists and probably better than Mrs. Mills, Russ Conway and Bobby Crush. Nice guitar too by Brian Fahey. No drummers name on the sleeve notes. An EMI label record from 1970.

"After serving in the RAF, Dickie left Durham and moved to London, where he began playing piano for small wages in various pubs. It was only after Doreen Davies, who was head of BBC Radio 2, noticed him at a BBC audition that he took a notable stride in his musical career. He has played on hundreds of BBC Radio broadcasts.

Dickie has produced scores of records and can be heard on hundreds of jazz recordings, as well as several recordings with the French pianist, Louis Mazetier. Dickie had a Top 40 UK hit single in 1969 with "Robin's Return" on the Major Minor Records label (MM 644). It reached number 33 on the UK Singles Chart.

Neville Dickie - When Somebody Thinks You're Wonderful

Neville Dickie - Keepin' Out Of Mischief Now
Posted by Wastedpapiers at 3:21 AM

First entry for some time. Have the sales dried up where you are, or is the choice a bit limited at the moment?

Yes, pretty slim picking's as far as vinyl is concerned. This is the first LP Ive bought for about a month.

I really enjoyed watching Fats Waller on that DVD. What incredible entertainment, such fun to watch.
Never heard of this chap though.

Veeeeeeeeery nice! Loved it!!!
Despite the charming, sartorial eccentricity of the gentleman, depicted on the cover, I probably would have passed by this record, as another boring "honky-tonk" LP...
Thank God, there is far more venturesome fellow beings out there than me...
THANKS, Michael!
Ilias

Thanks for your kind comment ilias. I'm glad you enjoyed it.