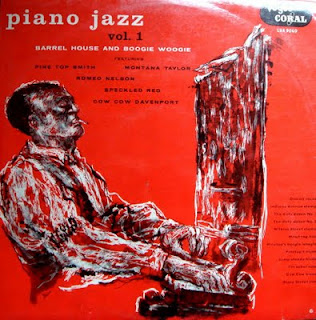 An LP on the Coral label I picked up in a Woolies sale about 38 years ago . I have always had a soft spot for some boogie woogie piano and some prime examples here by the likes of Pine Top Smith, Montana Taylor, Speckled Red and Cow Cow Davenport etc.

"Whoever thought of the word "boogie-woogie" (generally credited to Pinetop Smith who first used it on a recording included here ) certainly hit on one of those ideally onomatopoeic words. The forceful reetitious character of the word is boogie-woogie exactly, which relies on it's insistent bass figure for most of it's character and a blues-like repetition of the treble figure, more percussive than melodic. The conformity to the eight-to-the-bar bass and the twelve bar blues sequence might be thought to constrict the music; on the contrary it gives the utmost freedom and an endless permutation of variations which some of the modernist with their eleutheromania have failed to see."

"Montana Taylor made Detroit Rocks and Indiano Avenue Stomp for Vocalion in Chicago on April23, 1929. Nothing is known of his life; like so many folk artists he was active before the historians got to work and, if it hadn't been for these recordings we would have known nothing of him.

Speckled Red, whose real name is Rufus Perryman, is no less mysterious in origin. The Dirty Dozens No.1 was recorded in 1929 and No. 2 in 1930, and are his own compositions built around an old folklore rhyme which comprised of a set way of insulting and being insulted by someone with whom you'd had a bitter quarrel....

Romeo Nelson completes a trio of jazz ghosts. He was known to have lived in Chicago and recorded a few songs for Vocalion in 1929. Head Rag Hop, made on September 3rd that year, is a piano jazz classic on which Nelson makes the spoken commentary as well as playing, in an exciting and intricate piece of music."

Speckled Red - The Dirty Dozen No. 1

Speckled Red - The Dirty Dozen No. 2

Romeo Nelson - Head Rag Hop
Posted by Wastedpapiers at 1:08 AM

It is music like this, which I too enjoy, that prove the lie of Rock 'n Roll. Not that I think RnR is fake but it, like every musical form ever, has it influences and this is one of 'em.

Ingster is your WV

Thanks C.J. Absolutely - boogie-woogie was one of the main ingrediants in the rock 'n' roll gumbo.

Yes, I've noticed that -- particularly "surf" instrumentals of the 1960s. The melody line is almost always the same as the boogie woogie chord progression.

Please, Sir, I want some more! ... The Montana Taylor - Indiana Avenue Stomp link links to Speckled Red - The Dirty Dozen No. 1 .. just when you get me keyed up, so to speak. Thank you for your knowledge, time and generosity.

Thanks robert- I will try and upload the other side at some point.