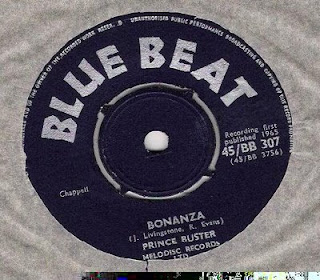 Another Blue Beat single from 1965 at the height of the Ska boom in Jamaica. Prince Buster is one of the most well known and prolific exponants. This song is based around the Bonanza TV theme - a popular western series through the 50's and 60's.

Campbell was born into a family in Kingston as a son of a helicopter pilot. He grew up in one of the city's toughest neighborhoods. At a young age, he developed a taste for turkish delight and yearned to be a cook. In 1956, he started singing at Kingston nightclubs for small pay. He formed a succession of bands with several of his friends, none of which were really successful.

What turned Campbell's music career around was the growing sound system craze. Across Jamaica, music promoters drove vans filled with stereo equipment to stage mobile parties. The operators of the sound system would play the most popular R&B dance records of the day, and often they would have a vocalist called a toaster call out the dancers' names, chant in rhythm, and make light-hearted boasts; the toaster form was the primary influence on early rap MCs.

Eventually, Campbell was introduced to Clement Dodd, a musically-inclined businessman who operated one of Kingston's most popular sound systems. Interestingly, Campbell was not hired as a musician but as security; because of rivalries between fans devoted to a particular sound system, the parties sometimes could become quite rough, and Campbell had been a skillful amateur boxer as a teenager. It was in this line of work that he earned the nickname "The Prince", which along with his boyhood moniker "Buster" (from his middle name Bustamente), formed the name under which he would later become famous.

He joined the Nation of Islam after meeting Muhammad Ali whilst on a tour of England in 1964."

Prince Buster - Wonderful Life
Posted by Wastedpapiers at 8:04 AM

mercy, you have some mazing tracks here. it's good to hear this old style music, and know it's still possible...
thank-you,
d

thanks for the feedback dugg - much appreciated.