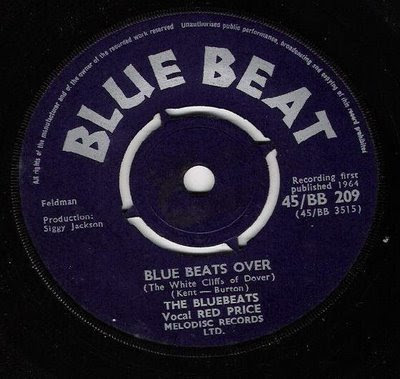 Yet another from the Basildon box of goodies I found way back. No info found about the Bluebeats but there is a modern ska band by the same name but assume they are not connected in any way. Released 1964.
Heres an interesting segemnt from The Blue beat Story site - well worth checkingmout for history of the label.

"In 1952 Jamaican entrepreneur Stanley Motta started making his own recordings in Kingston, inspired by Bertie King, an ex Alpha School Musician who had been resident in the UK since 1938 and was well known on the British Jazz circuit. King had released a few British recorded Mento records in the UK on his Limbo label, and when he returned to Jamaica in the early 1950s he suggested to Motta the idea of setting up his own recording facility and producing his own records for sale to the local JA market as well as exporting to the UK - in direct competition with neighbouring Trinidad, which was achieving much international acclaim for Calypso.

Shallit found himself in the position of being the agent to whom Stanley Motta would ship his tapes for mastering and pressing by Decca on his MRS (Mottas Recording Studio) label on 78 r.p.m. discs, which were then shipped back to Jamaica. This trans-Atlantic connection opened up the channels for Shallit to licence music directly from Jamaica, and he would soon establish links with all of the islands emerging producers and artists. As 78s gave way to the advent of the 7 45, Shallit set up the Kalypso subsidiary label which would include the first known recordings from Laurel Aitken and Lord Tanamo in its catalogue of some fifty Mento and R&B titles.

Other Melodisc subsidiary labels during the 1950s were such names as; Top, Son, Check, Dees, Hornet, Wasp, and D -an early Duke Ried outlet. The surge of popularity in Jamaican R&B in the late fifties was to see the foundation of three new subsidiary labels, each of which would specialise in releasing Jamaican and UK recorded R&B marketed primarily at the UKs growing West Indian population; Dice, Rainbow, and most influentially; the Blue Beat label."


The Bluebeats - Blue Beats Over

The Bluebeats - Kiss The Baby
Posted by Wastedpapiers at 1:42 AM

There was a (white) band in the
60's called The Bluebeats. Main man was the drummer Bobby Worth. They did the pubs and small gigs mostly in South London. Bobby Worth is now a top jazz drummer. Used to have his own orchestra. I saw him playing with Guy Mitchell at Lewisham Theatre. Mostly retired nowadays, but will still play with any top jazz artiste.