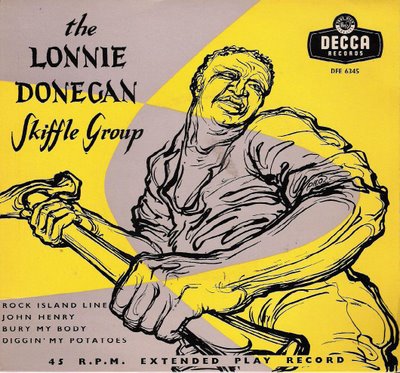 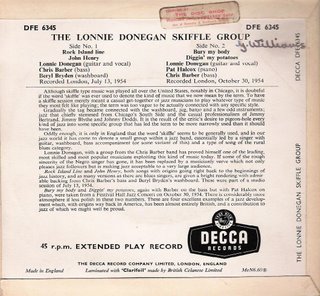 Another EP by Donegan that I found at the weekend for 25 pence. Recordings form the Festival Hall Jazz Concert of 1954 and in the studio at around the same time with Chris Barber (Bass), Beryl Bryden (Washboard) and Pat Halcox (Piano).

"He formed his own group, the Tony Donegan Jazz Band, in 1952. They were successful enough that the National Jazz Federation asked the band to play a show at Festival Hall with American ragtime pianist Ralph Sutton and blues/jazz legend Lonnie Johnson. The Federation had brought to the two over to England in defiance of a Musicians' Union ban on all foreign performers and needed a non-union band like Donegan's to play support for the two guests. The master of ceremonies at the show made a mistake in his announcement, introducing the American guitarist as "Tony Johnson" and the British banjo man as "Lonnie Donegan." The name stuck.

Donegan and his band eventually hooked back up with his old friend Chris Barber, who'd kept his band going throughout the previous two years, and eventually Barber and Donegan linked up with fellow jazzman Ken Colyer, into a kind of supergroup led by Colyer. The Ken Colyer Jazzmen, as they were called, specialized in Dixieland jazz, and built a formidible reputation, their shows popular in every club they played. It was during these shows, between sets by the full band, that Donegan would come on stage with two other players and perform his own version of American blues, country, and folk standards, punched up with his own rhythms and accents, on acoustic guitar or banjo, backed by upright bass and drums. The name "skiffle" was hung on this music as a way of referring to it on the group's posters. The word, according to Donegan, was suggested by Ken Colyer's brother Bill, who remembered an outfit called the Dan Burley Skiffle Group, based in Chicago in the 1930's. It seemed to fit, and it caught on; the Ken Colyer Jazzmen became almost as popular for Donegan's between-set skiffle songs as they were for their Dixieland music. "


These SendSpace files are available for seven days or until exhausted.
Posted by Wastedpapiers at 12:13 AM

Usual great selections, cheers!
Any chance of a readers favourite post were we might get to grovel for a repost of tracks we'd like the chance to grab again?

Good idea arty. I'll put a new page up where you can vote in the comments. Thanks for the encouragement- always greatly appreciated.