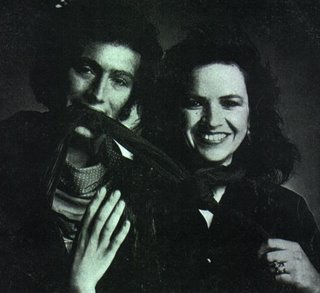 A record called "The Time Is Right" by Terry and Gay Woods from 1976 on the Polydor label I found at Brick Lane. No sleeve. I've always had a soft spot for the Fairports, Steeleye Span and that English folk rock scene of the late 60's and early 70's.

"GAY & TERRY WOODS co-founded Steeleye Span with ex-Fairport Convention bassist Ashley Hutchings. They left that band in 1970 and formed their own Woods Band with guitarist Ed Deane, drummer Pat Nash and Gay's brother Austin Corcoran.
The Woods Band released an eponymous-titled album in 1971 but soon after Gay and Terry Woods returned to live in Ireland. Their repertoire included distinctive arrangements of traditional folk songs and they attracted the attention of Polydor Records who signed the duo in 1973. Their first album for the label, 'Backwoods' , received encouraging reviews and had a strong Irish feel, the follow-up 'The Time Is Right' was more influenced by American folk and country music.

Gay and Terry's third and final album for Polydor was released in autumn 1976 and was electric folk with support from Fairport Convention's Dave Pegg and Dave Mattacks and Andrew Bodnar and Steve Goulding from Graham Parker and The Rumour.

After a couple of independent label releases in the seventies Gay relocated to Holland and formed Auto Da Fe with Trevor Knight. Auto Da Fe was far removed from the previous folk rock incarnations and the band's synthesiser-led rock featured on two albums and six singles. In the early 1990s Auto Da Fe disbanded.

Terry Woods joined The Pogues in 1985 and helped that band establish their niche as an important link between punk and Irish traditional music. This association lasted until the early-1990s. In 2000 Terry released the critically-acclaimed 'Music From The Four Corners Of Hell'."


These SendSpace files are available for seven days or until exhausted.
Posted by Wastedpapiers at 9:08 AM

Good choice. If you like the folk style of that particular era try and check out Meic Steven's only English language album from around 1970 (he usually only sings in Welsh) it really does epitomise the much overused term 'lost classic'

It's a much sought after rarity on vinyl and even the CD reissue is getting hard to find, but it's well worth the effort.