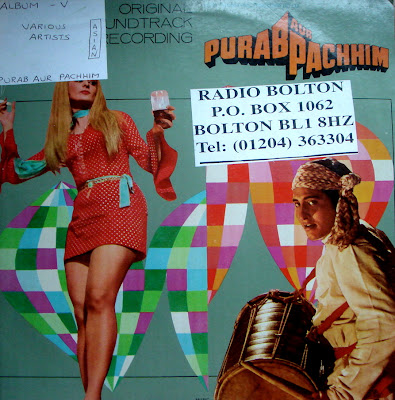 I thought I had uploaded this LP before but couldn't find it in the archives which is strange as the Twinkle Twinkle Little Star track is a classic of Bollywood kitsch. Sadly the rest is rather ordinairy of it's type. Released in 1971 on the Odeon label and seems to have been the property of Radio Bolton at one time. A soundtrack recording from the film of the same name. All the best singers are here - Ash Bosle, Lata Mangeshkar etc.

IMDb says of the film -

"Circa British rule in India, Harnam betrays a freedom fighter, and as a result is rewarded, but the freedom fighter is killed, leaving his wife, and family devastated and destitute. Years later, the freedom fighter's son, Bharat, has grown up and goes to Britain to study. On his arrival in Britain, he is quite shocked to find that the Indian population settled there, shun India and Indians. He takes it upon himself to try and change their way of thinking, meets with Prithi, a Blondie of Indian origin, and both fall in love. Prithi accompanies him to India, and is appalled at the conditions that Bharat and his family in. Will this shock end their relationship?"


Purab Aur Pachhim - Side Two
Posted by Wastedpapiers at 5:13 AM