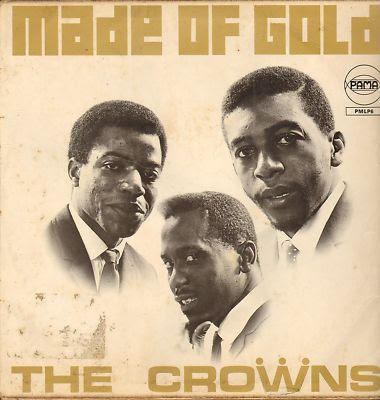 An LP on the Pama label from UK which is mainly known for home grown Ska and Reggae records in the 60's and 70's. This second division soul is pleasant enough but not a patch on Tamla Motown or Stax.

"The Crowns really came about because the three buddies who virtually grew up together and sang together for "kicks" went their own separate ways when enlisted in Uncle Sam's forces. Trevor was dishing out uniforms at the U.S. Air Base, Omaha, Nebraska, when who should he see in line but Bunny and Bobby. Trevor exploded with "If that don't CROWN it all," and thus the name was born. Now some two and half years later, based here in London, the CROWNS are one of the most demanded soul harmony groups and their initial disc sales proved that their talent ranks with the greatest.
Seeing them on stage is enough to give anyone a nervous twitch at the sheer speed of their brilliant act."


The Crowns - Side One
Posted by Wastedpapiers at 12:52 AM