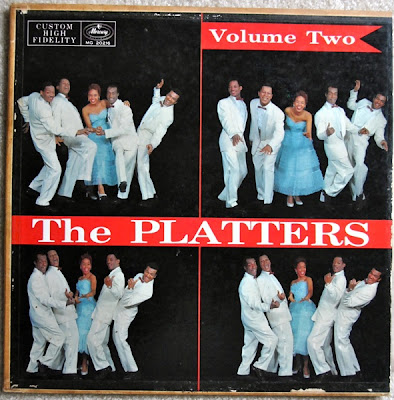 Some doo wop for a change now with The Platters from the late 50's on this rather battered Mercury LP.

"The Platters formed in Los Angeles in 1953 and were initially managed by Ralph Bass. The original group (Alex Hodge, Cornell Gunter, David Lynch,Joe Jefferson, Gaynel Hodge and Herb Reed) managed to land a contract with Federal Records, but found little success before meeting music entrepreneur and songwriter Buck Ram. The band recorded a series of singles backing Linda Hayes before Ram made some changes to the lineup, most notably the addition of lead vocalist Tony Williams (Linda Hayes' brother) and female vocalist Zola Taylor. Under Ram's guidance, the Platters recorded seven singles for Federal in the R&B/gospel style, scoring a few minor regional hits on the West Coast. One song recorded during their Federal tenure, "Only You (And You Alone)", originally written by Ram for the Ink Spots was deemed unreleasable by the label.
Despite their lack of chart success, the Platters were a profitable touring group, successful enough that The Penguins, coming off their #8 single "Earth Angel", asked Ram to manage them as well. With the Penguins in hand, Ram was able to parlay Mercury Records' interest into a 2-for-1 deal. To sign the Penguins, Ram insisted, Mercury also had to take the Platters. Ironically, the Penguins would never have a hit for the label."


The Platters - Side One
Posted by Wastedpapiers at 1:46 AM