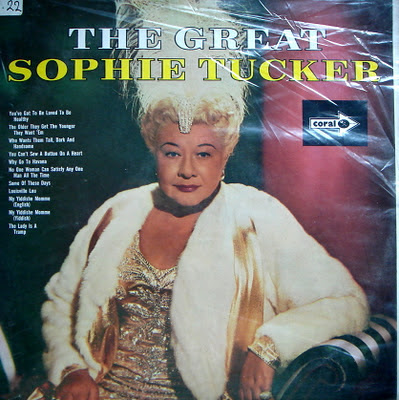 An LP on the Coral label from 1966 but suspect these songs were recorded in the 30's or 40's. Some are almost spoken rather than sung and remind me of Jimmy Durante and others who employed this style.
IMDb says -
What becomes a legend most? For the beloved Russian-born entertainer Sophie Tucker, it was most definitely the live stage. The stage was her home. She fed off a live audience and it's what made her the sensation she was. Seeing her up close and personal was to get the very best of her. Movies and TV were too restrictive to capture the true essence of Sophie Tucker. For well over five decades, she performed everywhere -- Broadway, vaudeville, cabaret, clubs and burlesque.

This gutsy, irrepressible "Jazz Age Hot Mamma" was born Sophie Kalish in Russia in 1884 just as her family was about to emigrate to the United States. They left when she was a mere three months old, settling in Hartford, Connecticut. She started performing as a youngster in her parent's small restaurant, occasionally singing and playing the piano for tips. Marrying in her teens to a ne'er-do-well, she was forced to continue at the restaurant to support a family of three (including baby boy Bert). Within a short time, however, she divorced, left her child with her parents, and headed to nearby New York with visions of stardom. Changing her name to the more suitable marquee moniker of "Sophie Tucker" (her ex-husband's name was Louis Tuck), she proceeded to take the town by storm.

Sophie started out in amateur shows. Not a beauty by any stretch, she was grossly overweight and quickly found that self parody and racy comedy, punctuated by her jazzy musical style, would become the backbone of her popularity. Playing at various dives, she earned a minor break in 1906 after earning a singing/piano-playing gig on the vaudeville circuit. Disguised in blackface, she played ragtime music. Her humor, of course, came at the expense of her weight but, with such ditties as "Nobody Loves a Fat Girl, But Oh How a Fat Girl Can Love," she had audiences eating out of the palm of her hand."

1. Some Of These Days

2. You've Got To Be Loved To Be Healthy

3. The Older They Get The Younger They Want 'em

4. Who Wants Them Tall Dark and Handsome

Sophie Tucker - Side One

Posted by Wastedpapiers at 5:07 AM