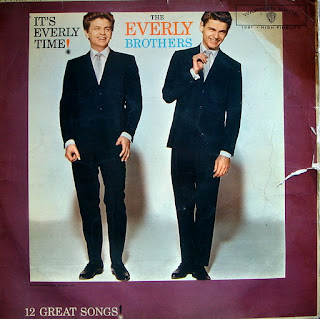 An LP form the market today. A rather battered sleeve but suprisingly few scratches. Released in 1960 and containing a nice mix of ballads and up tempo numbers from one of the best duos of that time.
Country Music Classics website says -
"The Everly Brothers have often been called "an overnight success," and although the duo became one of the most successful music acts between 1957 and 1962, that success did not happen overnight.

Their father, Ike Everly, moved to Chicago in an effort to sustain a career in country music, but wound up in the Midwest. In 1955, he brought his family to Nashville, Tenn., hoping his singing sons might find the success that had eluded him.

Don Everly did make some marks as a writer, penning "Thou Shalt Not Steal" by Kitty Wells, two songs recorded by Justin Tubb and one for Anita Carter.

Don and Phil signed a recording contract with Columbia Records, but after four songs the record label terminated their contract and released them. Then, the man who later became The Everly Brothers' record proÐducer turned them down the first time he heard them because he didn't like their sound.

Archie Bleyer, who initially turned them down, was searching for a country music act for his Cadence Records. But after a second listen, he gave them a recording contract.

Wesley Rose, of Acuff Rose Music, took the song "Wake Up Little Susie" to Bleyer, who immediately disliked the song because of the lyrics. The song was written by husband and wife team Felice and Boudleaux Bryant. Bleyer said it sounded like Susie and her boy friend had slept together at the drive-in movie. But the Everly Brothers recorded the tune despite Bleyer's objection.

Although the record was banned by some radio staÐtions because of its "suggesÐtive lyrics," it entered the country music charts Sept. 30,1957, and quickly made it to the No. 1 spot, where it stayed for 22 weeks. The record was also No. 1 in pop music the week of Oct. 14, 1957.

The Everly Brothers were unique to the music business not only for their commerÐcially crafted recordings, but because they were one of the first consistently successful rock n' roll acts to come out of Nashville, Tenn. Their songs came from Nashville songwriters, were recorded in Nashville with Nashville musicians, yet left their mark on both the pop and country music charts."
Tracks are as follows -
1. So Sad ( To Watch Good Love Go Bad)
2. Just In Case
3. Memories Are Made Of This
4. That's What You Do To Me
5. Sleepless Nights
6. What Kind Of Girl Are You
The Everley Brothers - Side One
Posted by Wastedpapiers at 4:51 AM