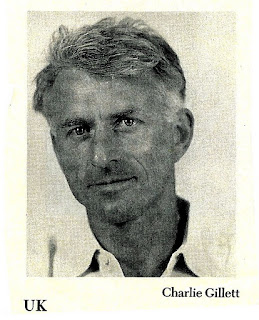 Another taped radio show with DJ Charlie Gillett from the 80's. This time a themed show with songs about Doctors and other related subjects. Please excuse poor quality of recording which has deteriorated over the years.
Part of the obituary in the Guardian by Richard Williams -

"Attempting to find a niche in journalism, he wrote for New Society, Anarchy and the soul music magazine Shout before securing a column in Record Mirror, in which he could express his enthusiasm for rhythm and blues and early rock'n'roll. But it was when The Sound of the City was published in the US in 1970, to great acclaim, that his reputation was established. The book looked beneath the surface of the first 15 years of rock'n'roll, tracing its antecedents and making thoughtful, typically unpretentious assessments, not just of the musicians but of the fledgling industry and its visionary hustlers. Its avoidance of received wisdom inspired countless authors to pursue its themes in the subsequent decades.

Four years later Charlie produced Making Tracks, a serviceable history of Atlantic Records. But writing books, it turned out, was not his true vocation. Honky Tonk was heard for the first time in 1972, and over the next six years it became compulsory Sunday listening for the kind of music lover to whom the intimate music of JJ Cale or Bobby Charles spoke louder than the pumped-up sounds of Led Zeppelin or Yes, and who were thrilled when Charlie played demos by Elvis Costello or Graham Parker.

Wisely, he turned down an offer to present BBC2's The Old Grey Whistle Test, realising that he would have little to say to musicians for whose work he cared nothing. The intimacy of radio suited him better, and he became a series consultant to Radio 1's well-received The Story of Pop. In 1972 he was also part of the writers' collective that founded Let It Rock, a monthly magazine.

It was in the mid-1970s that he and his dentist, Gordon Nelki, formed a partnership which led them to manage Kilburn and the High Roads (whose lead singer was Ian Dury) and to start a label and publishing company, Oval Music. Their successes included Lene Lovich's Lucky Number, Paul Hardcastle's 19 and Touch and Go's Would You...? Later he acted as a music consultant to film companies and advertising agencies.

In 1979 he moved from BBC Radio London to Capital, the city's commercial station, and began to feature music from around the world. Sacked in 1983, he was brought back by public demand and stayed until 1990. In May 1995 he returned with a show on GLR, Radio London's successor, and began his World Service series in 1999. He was also a regular presenter of Radio 3's World on 3.

In recent years he contracted a disease of the autoimmune system that forced him off the air and finally ended his Sunday-morning kickabouts on Clapham Common with players from an assortment of African and South American countries. It was followed by a stroke and, last week, a heart attack outside his home. He is survived by Buffy, their daughters Suzy and Jody, their son Ivan, and two grandchildren.

Charlie Gillett - Doctor Doctor Side One

Posted by Wastedpapiers at 7:46 AM