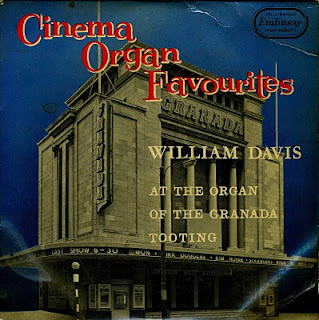 Another gem I found today- an EP on the Embassy label that features William Davis playing tunes on the Tooting Granada Cinema organ back in 1961. Again the sleeve caught my eye with it's image of a majestic old cinema in the days when they still flourished. The building is still there apparently and used for Bingo now sadly - the organ remains entombed under the floor and has suffered flood damage. A group of enthusiasts are trying to collect money to get it raised up and working again.

"When the Cinema was converted to Bingo in 1976, a flat false floor was fitted in the stalls to level it off in line with the stage. This entombed the Wurlitzer Organ which was located in the centre of the Orchestra Pit, along with the two pipe chambers underneath the stage “speaking” into the auditorium via adjustable openings known as swell shutters. It is not always appreciated that when theatre organs were in ascendancy in Britain they were somewhat in decline in America. Indeed the Tooting Wurlitzer (like many of its peers) was second hand- it had been a 3 Manual 10 Rank instrument installed in the Majestic Theatre Sacramento in 1926 and was refurbished by the Wurlitzer Company for Tooting. It was expanded by a further two Ranks in 1933, a tight fit into the already crowded chambers."

Read more about it HERE.


William Davis - The Whistler & His Dog

William Davis - Comedians Gallop
Posted by Wastedpapiers at 7:32 AM

Brilliant blog! FYI, the "Sweet Mystery of Life" link is already bringing up a "Invalid or Deleted File" page.