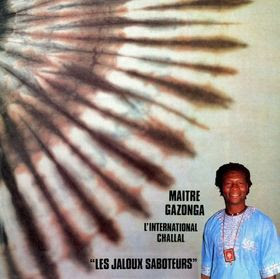 An LP on the Tangent label from France. Not much can be found out about Maitre just this small biog -

He studied in Fort Lamy, now Djamena, and later worked as a bookkeeper. When he was 21 he decided to become a musician and together with several others he created orchestre Saltanat Africa but before long he left them and formed his own band l'International Challal. Hamed drew his inspiration from the folk music of all the regions in Chad."

Maitre Gazonga - Les Jaloux Saboteurs
Posted by Wastedpapiers at 11:59 AM

Hello there ! I'm a follower of your (really good) blog ! I would like to know if you could post the songs of this album as I am very curious of what there is in it (I've already got "Le Joyeux Saboteurs"/"Kelina"/"Koysse".
Thanks a lot on advance !
Manuel (from Nouakchott, Mauritania)
bengoechea.manuel@gmail.com