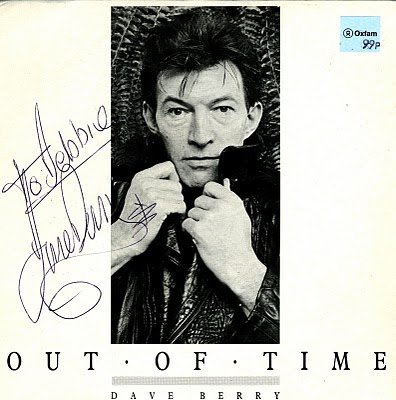 Found this in the Oxfam shop the other day. A single from 1988 on the Flagstaff Records label. I must admit I only bought it for the signature but intrigued to hear what Dave had done to a Stones classic. Sadly it's a pretty lack lustre version. The B side is more interesting though still not a patch on his hits of the 60's. You are urged to check out the double CD of his early hits that has just been released.


"He performed a mixture of hard R&B and pop ballads. He was popular in Britain, and on Continental Europe. His early hits name checked his backing band, The Cruisers who at that time were made up of John Fleet (bass and piano), Roy Barber (rhythm guitar), Frank Miles (lead guitar) and Kenny Slade (drums). Berry parted company with this line-up around the time of "The Crying Game". He recruited four more local musicians - Frank White, Johnny Riley, Pete Cliff and old friend Alan Taylor to be the second generation of Cruisers, with lead guitarist White eventually replaced by Roy Ledger until around 1965, when personnel changes began to be more frequent.

"The Crying Game" (1964), B. J. Thomas' sentimental "Mama" (1966) and "This Strange Effect" (1965) - the latter written by Ray Davies, are among his best remembered hits. Indeed, "This Strange Effect" became a Number One hit for him in Holland and Belgium, countries where he still enjoys superstar status, resulting in a Special Award from Radio Veronica, Holland, for their best selling pop single of all time. His 1965 hit "Little Things" was a cover version of Bobby Goldsboro's Stateside Top 40 success. Another one of his songs, "Don't Gimme No Lip Child", was covered by the Sex Pistols. His stage act, drawing largely on Elvis Presley, and Gene Vincent, provided an inspiration for Alvin Stardust. Such was his enigmatic, and unconventional presence, that several punk rock acts, such as the Sex Pistols, later acknowledged him as an inspiration.

The Geoff Stephens penned song, "The Crying Game", brought Berry's voice to his biggest international audience ever in 1992, when it was used as the theme song for one of that year's most successful films - Neil Jordan's The Crying Game. Berry also regained some much-overlooked recognition, when he was the surprise hit of the annual Alexis Korner Tribute in 1995."


Dave Berry - Out Of Time

Dave Berry - Serenade To Alice
Posted by Wastedpapiers at 9:40 AM

Thanks for sharing, Debs ;)