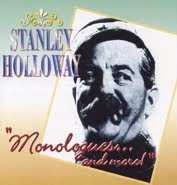 A CD found recently at a boot sale. Still available I think if you search for it on the Avid label. 2001. Mostly the monologues that he was famous for but with a few novelty/ music hall songs thrown in for good measure.

"He was born in Manor Park, Essex (now Greater London), England, and attended The Worshipful School of Carpenters in Stratford.

His Mother Florrie was a housekeeper and his father George was a Lawyers Clerk. He had one sister called Millie.

His first job was as a junior clerk in a boot polish factory called "Everitts Nutta and Jetta"" where he earnt ten shillings a week. His second job was again as a clerk but this time at Billingsgate fish market. Whilst working there, he began his performing career as "Master Stanley Holloway -- The Wonderful Boy Soprano", from 1907. He began performing in end of pier concert parties at English east coast seaside resorts, including Walton-on-the-Naze and Clacton-on-Sea where he appeared for three years in Bert Graham and Will Bentley's concert party at the West Cliff Theatre in 1910.

He was then recruited by established comedian Leslie Henson to feature as a support in Henson’s own more prestigious concert-party performing in "Nicely, Thanks" in 1911.

He then planned a career as a singer in 1913 and went to Milan to train his voice, but realized that this wasn't for him and returned home. He then followed his heart and carried on in light entertainment.

In 1914 when World War I was in full swing, he enlisted in the Connaught Rangers infantry regiment. Upon joining he was immediately commissioned as a Second lieutenant. This was because a few years earlier he had had some training as a private in the London rifle Brigade.

Although an estimated 2,500 members of this regiment were killed during the Great War, Holloway survived and immediately began singing and acting in London's music halls and theaters, performing at the Winter Garden as Captain Wentworth in Guy Bolton and P.G. Wodehouse's Kissing Time in 1919, and as Rene in A Night Out in 1920.

After the war he joined the Royal Irish Constabulary in 1920 as a Temporary Constable but left by the beginning of 1921. The 'Temporary Constables' of the RIC are more generally remembered as the 'Black and Tans'.

After the war, he found his first big success in the show The Co-Optimists which ran from 1921 until 1927 and was then filmed in 1929. A second run of the show from 1929 developed his comic song and monologue repertoire, which launched his recording career with records of his own created character, "Sam Small," and Marriott Edgar's "The Ramsbottoms" selling world wide.

Holloway established himself as a BBC radio personality in 1923 and developed his solo act throughout the 1920s while continuing his involvement with the musical theater and [The Co-Optimists]]. He was cast as Bill Smith in the London production of Vincent Youmans' musical comedy Hit the Deck (1927), in Song of the Sea (1928), and in Coo-ee (1929). He began recording his monologues for the phonograph market in the early '30s. Based on colorful "North Country" characters named Albert and the Ramsbottoms (by George Marriott Edgar) and Sam Small (whom Holloway created), these remarkable recitations were couched in rhyming stanzas. Apart from speaking the monologues, Holloway would often sing the verses, carefully sticking to the words but always characterizing them in his own special way. Other contributors who would write with Holloway included Greatrex Newman, Robert Patrick Weston, and Bert Lee."

Stanley Holloway - The Parson Of Puddle

Stanley Holloway - My Missus
Posted by Wastedpapiers at 8:29 AM

Hopefully you've got some Albert ones on there.
"There's a seaside town called Blackpool..."

Yes, plenty of Albert's Gail- namely Albert And The 'Eadsman, Albert Evacuated and Albert And His Savings. Also some Sam's. I already have another 2 CD's of his monologues so glad of a change with the songs that you dont hear so much of. Stanley had a strong singing voice which ofcourse he used to good effect in My Fair Lady.

Like meself, a good old fashioned Essex boy. Funny that, how London is constantly moving outwards. One of my grandparents was born in 1897 in Camberwell, Surrey (not London) and my other grandmother was born in 1878 in Poplar, Middlesex!

Stanley Holloway was a great entertainer and his droll voice, and amazing ability with accents, never ceases to amaze. A very funny man.

12 weeks ago, the English Heritage people put a blue plaque on the house in Manor Park where he was born in 1890.
The house is at 25 Albany road...not far from Manor Park Station.
I was born a few hundred yards from Stanley, (albeit 59 years apart!) and spent the first 20 years of my life there.
I've always been a huge fan, especially of his work in the Ealing comedies.

Thanks CJ and TQ for those snippets - most illuminating!