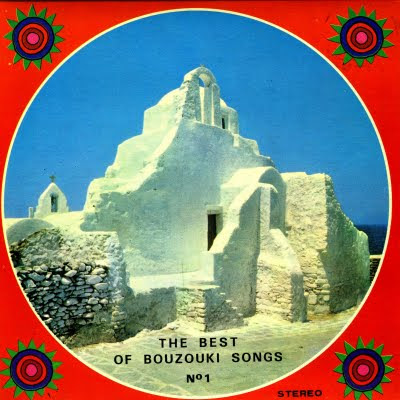 This EP on the Odeon label caught my eye yesterday at the boot sale. It's pretty much what I expected. A holiday souvenir from Greece in the 60's or 70's I imagine.

"In Greece, this instrument was known as the pandura or pandourion, also called the "trichordo" because it had three strings; it was the first fretted instrument known, forerunner of the various families of lutes worldwide. The source of our knowledge about this instrument is the Mantineia marble (4th century BC, now exhibited at the National Archaeological Museum of Athens), depicting the mythical contest between Apollo and Marsyas, where a pandouris is being played by a muse seated on a rock.

From Byzantine times it was called the tambouras. The modern Turkish Tanbur is practically identical to the ancient Greek pandouris. On display in the National Historical Museum of Greece is the tambouras of a hero of the Greek revolution of 1821, General Makriyiannis. This tambouras bears the main morphological characteristics of the bouzouki used by the Rebetes.

The Turkish Saz belongs to the same family of instruments as the bouzouki. A middle-sized kind of saz is called a "bozouk saz". Bozuk in Turkish means "broken, not functioning, modified". Here it is used in order to specify the size of the instrument. It is concluded, therefore, that the bouzouki has been named after the jargon of the Turkish saz. An alternative popular etymology maintains that the word "Bozouk" was used because different tunings (the Turkish 'düzen') are required for the instrument to play in different musical scales (known as Dromoi in Greek, Maqam (pl. Maqamat) in Arabic). A tuning known as the "bozuk düzen" (broken tuning) still exists in Greek folk music.

The early bouzoukia were mostly Three-string (Trichordo), with three courses (six strings in three pairs) and were tuned in different ways, as to the scale one wanted to play.

After the late '50s, four-course (Tetrachordo) bouzoukia started to appear. The four-course bouzouki was made popular by Manolis Chiotis. Chiotis also used a tuning akin to standard guitar tuning, which made it easier for guitarists to play bouzouki, even as it angered purists."


Yiannis Kalatzis - The Skittish One

Yiannis Kalatzis - How Right The Children Are
Posted by Wastedpapiers at 1:23 AM

Yiannis Kalatzis, was a very prominent singer of the Greek ethnik-folk music from the late 60's throughout the 70's, when Greece was under an extreme right dictatorship... He additionally, had sung a song titled, "O Yiorgos ine poniros" ("Yiorgos is sly" or something... Maybe it exists in this EP) that was thought to imply the then leader of the junta, Yiorgos Papadopoulos...
By the way, is always fun reading the translations or trying to translate the names of some Greek songs, because many of them are in Greek slang (so to say) and the translators are trying to render them into the English slang...

Anyway, I don't know what a sensation do these songs to non-Greeks, but this kind was extremely popular back then. Personally, I enjoy greatly the voice and the songs of Yiannis Kalatzis, even though I'm not a fan, in general, of this sort of Greek music...
Many, many thanks, Michael! Euharisto!
Ilias

PS: For the avoidance of any kind of misconception, I'm not under any circumstance a supporter of a dictatorship, right or left, and surely, wasn't Yiannis Kalatzis himself also... :D