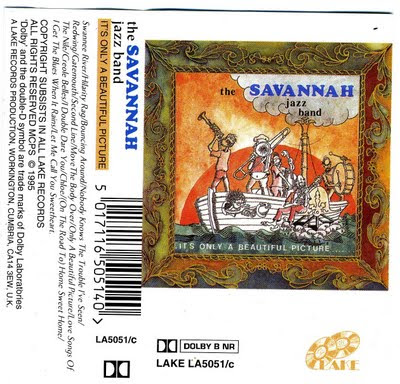 Another trad jazz cassette from the boot sale a couple of weeks ago for 25p. Reminds me of the Temperence Seven and trad jazz revival of the 50's.

"The Savannah is without doubt one of the most popular UK bands around. With their talent for satisfying listeners and dancers alike they have built up a truly international reputation at major festivals in the UK and overseas.

The band's driving and exciting New Orleans style attracts large audiences whenever they play. Their many fans follow them from festival to festival and turn out devotedly to see them at regular venues in the UK. This tremendous support is very much appreciated by the band.

Demand for their music has prompted regular recordings on tape and CD. To date, 18 recordings have been made of the band, 12 live concerts and 6 in the studio by Lake Records. Their CDs sell like hot cakes. Other 'goodies' such as Polo Shirts, Sweatshirts, and even ladies Knickers sporting the Savannah logo were once a popular line - a sure sign of the band's popularity, all sadly discontinued.

Their music can be heard as far away as New Zealand and America and they have travelled to Holland, Germany, Denmark. Finland, Majorca, Canada and all parts of the UK, delighting new audiences and collecting loyal supporters along the way.

However, the band's reputation has not suddenly emerged; it has been hard earned and well-deserved for nearly 3 decades. Formed in 1979, The Savannah started their swinging Thursday night sessions at the Station Tavern at the railway station in Huddersfield, West Yorkshire, which has now come to an end.

Fortunately their dedication and ability has steamed ahead, and a residency continues at the Royal British Legion , Golcar where on the first Thursday of each month the band can be seen and heard for a relatively small entrance fee.

The Savannah Jazz Band is as much a musicians' band as it is a magnet for its impressive number of loyal fans. Over the years the band has enjoyed playing with some very fine and talented musicians and the genuine admiration that exists between Savannah and the many guests who have joined them is mutual. This tradition is continued at the Royal British Legion, Golcar."

Tracks include - Only A Beuatiful Picture, Love Songs Of The Nile, Creole Blues, I Double DareYou, Chloe, Home Sweet Home, I get The Blues When It Rains, Let Me Call You Sweetheart.


The Savannah Band - Side Two
Posted by Wastedpapiers at 3:06 AM