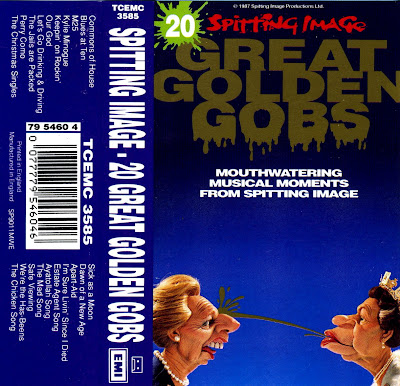 A cassette on the EMI label from 1990 - a compilation of songs from the satirical puppet series Spitting Image that was popular throughout the 80's and 90's on TV.
Many of the voice artistes involved went on to become famous in there own right later on - people like Chris Barrie, Steve Coogan, Hugh Dennis and Harry Enfield to name but a few.

"The premiere of Spitting Image opened with a puppet caricature of Israel's prime minister Menachem Begin wearing a magician's outfit. With a flourish, he produced a dove of peace from his top hat, then announced, "For my first trick . . ."--and wrung its neck.

This was the first of many outrages perpetrated on the British public, who were either offended or delighted each Sunday evening from 1984 to 1992. Spitting Image was roundly condemned for its lampooning of the Royal family: the Queen was portrayed as a harried housewife, beset by randy, dullard children and screaming grandkids. Britain's most cherished figure, the Queen Mother, appeared as a pleasant, if somewhat boozy great-grams.

The Conservative leadership was a constant target: Margaret Thatcher's puppet was a needle-nosed Reagan groupie who consulted with Hitler on immigration policy and sold off England's infrastructure to baying packs of yuppies and her eventual successor, John Major, was portrayed as a dull, totally grey man who ate nothing but peas. The opposition Labour leaders, including Neil Kinnock as "Kinnochio," were pilloried for their inability to challenge decades of Tory rule.

In spite of its detractors, over 12 million viewers (a quarter of England's adult population) watched Spitting Image on Central Independent Television, a subsidiary of ITV. Its spin-off records, books, comics and videos sold in the million. It won an International Emmy for "Outstanding Popular Arts" program in the 1985-86 season, and a franchised edition appeared on Moscow television. "

Spitting Image - I'm Sure Livin' Since I Died

Spitting Image - The Chicken Song
Posted by Wastedpapiers at 12:23 PM

I remember it well. There is, or was a puppet of Margaret Thatcher in a museum in Grantham, Lincs, as she was born there.

WOW!
I knew nothing about the British version of a show that existed also in Greece from early, till mid 90's! And what really excited me is, that exists also in Greek an expression, that implies similarity between persons by using the word "spit"! That was also the show's name!
I recognised immediately the puppet style, that was the same for the satire-parody of the then Greek politicians.
Unfortunately, the Greek version was not as grandiose (so to say), well-setted and organised as the British one, but was pretty successful in Greece, too!
It's unquestionable highlight though, was that all voices were done by a single person (our national mimic, so to say) and was really excellent!
I was aware though of the existence of a Russian and a German version of this program with the same puppets, as well.

The origin of this phrase is explained here-

One of the very first questions that was asked at the Phrasefinder bulletin board was about 'spitting image'. There have been numerous such queries there since and some ask if the term was originally 'splitting image', i.e. deriving from the two matching parts of a split plank of wood. That's a plausible idea. The mirror image matching of the grain of split wood has long been used in furniture and musical instruments for decorative effect. The technique is known as book-matching and the resulting pattern is called fiddleback - for obvious reasons. The theory has its adherents and dates back to at least 1939, when Dorothy Hartley included it in her book Made in England:

"Evenness and symmetry are got by pairing the two split halves of the same tree, or branch. (Hence the country saying: he's the ‘splitting image’ - an exact likeness.)"

As so often though, plausibility isn't the end of the story. The numerous forms of the term 'spitting image' - spit and image, spitten image, the dead spit of etc., appear not to derive from 'split' but from 'spit'.

Some commentators have suggested that 'spit' may be a corruption of 'spirit', but that appears to be fanciful and isn't backed up by any early examples of 'spirit and image'. The allusion is more likely to be to someone who is so similar to another as to appear to have been spat out of his mouth. That idea, if not the exact phrase, was in circulation by the end of the 17th century, when George Farquhar used it in his comic play Love and a bottle, 1689:

"Poor child! he's as like his own dadda as if he were spit out of his mouth."

No version of the phrase is especially old. The earliest reference is in Andrew Knapp and W. Baldwin's The Newgate Calendar, 1824–26:

This pre-dates any 'splitting image' citation by a good hundred years, which tends to rule out the latter as the source. 'Spit' or 'dead spit', with the meaning of likeness, appears in print several times in the 19th century. Here 'dead' means precise or exact, as in dead ringer.

Other languages have their own versions of this phrase. For example, French - "C'est le portrait craché de son père" ("He's the spitting portrait of his father") and Norwegian - "som snytt ut av nesen paa" ("as blown out of the nose of"). These are difficult to date and may predate the English version or may derive from it.

Toward the end of the 19th century we find 'spit and image'. In 1895, an author called E. Castle published Lt. of Searthey, containing the line:

"She's like the poor lady that's dead and gone, the spit an' image she is."

Very interesting!
Though, in my opinion the origin of this phrase should also be checked, from a religious perspective (and thus can be maybe explained, why it exists in many cultures, which incidentally, share a common Christian tradition in their history).
Namely, the idea, that God made us in "His image and likeness", and further the concept that spat, took earth and made the human flesh...
Just an assumption, though...