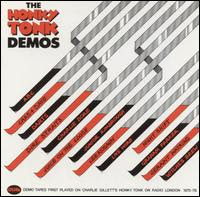 Compilation I bought on the Oval label back in 1979 for budget price of 3:99p. Wonderful selection of early demos from pub rockers and outsiders who soon became big on other labels - such as Darts, Chas 'N' Dave, Dire Straights and Elvis Costello ( not featured on this LP ). DJ Charlie Gillett had a knack of spotting talent before anyone else. He saw the potential of Ian Dury before The Blockheads were even thought of when he became manager of Kilburn and The Highroads for a short while. The Radio London programme from which most of these tracks are culled was a veritable Who's Who of 70's rock 'n' roll with guests ranging from Ry Cooder and Fats Domino popping up on a regular basis rubbing shoulders with Blondie, David Byrne and a host of soon to be stars of the burgeoning new-wave and punk scene which grew out of the fertile pub-rock phase of the mid to late 70's.

Junior Kimbrough - In The City


These SendSapce files are available for seven days or until exhausted.
Posted by Wastedpapiers at 8:31 AM

May I have a Chance to get the full Album for Download?

what about the whole album?

Looking for "Lone Car Cruising".Is there a Chance to get it?