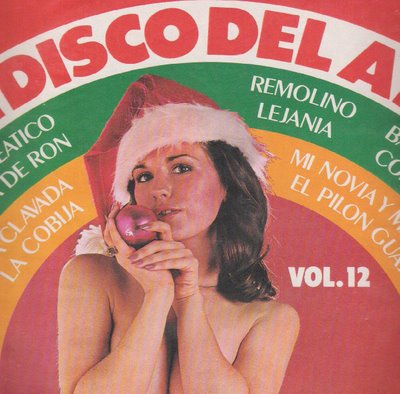 Here is one I uploaded before, back in 2006. It's from Colombia and dated 1980. It certainly looks very xmassy but my guess would be that it's "Hits Of The Year" and these are some of the favourites in Colombia in 1980. It makes a change from the usual Christmassy music thats churned out at the is time of year.

"Modern Colombian music is a mixture of African, native Indigenous and European (especially Spanish) influences, as well as more modern American and Caribbean musical forms, such as Trinidadian, Cuban, and Jamaican. The national music of Colombia is said to be cumbia.
Cumbia is a mixture of Spanish and African music, the latter brought by slaves. In the 19th century, slavery was abolished and Africans, Indians and other ethnic groups mixed more fully. Styles like bambuco, vallenato and porro was especially influential. When the waltz became popular in the 19th century, a Colombian version called pasillo was invented. International Latin, a type of pop ballad, and salsa music are best-represented by Charlie Zaa and Joe Arroyo, respectively."


These SendSpace files are available for seven days or until exhausted.
Posted by Wastedpapiers at 4:01 AM

hi "A1 wasted papers" !
at the end of the year, I wanted to send big hello and >Merry Christmas>
and to express my gratitude for all nice music (well,most of it was nice)
you posted here!
and if you are interested to see my blog:
www.umetnost.blogspot.com - please can you put link so people could trace it.
THANK YOU !
CHEERS !
Sincerely,
P.Petrovic

GREAT cumbia!! Thanks for this holiday gift, and all the other wonderful music you post all year.

Thanks guys! Nice to get some postive feedback. I will try my best to find some interesting music for 2009.