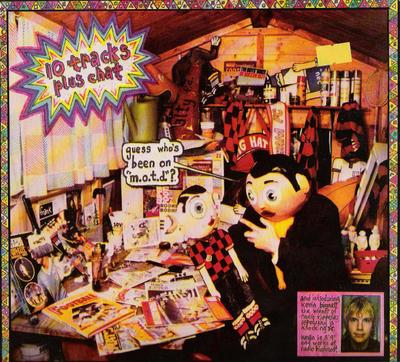 "Frank Sidebottom: Nothing more than Chris Sievey wearing a paper maché head. He was created by Sievey as the Freshies' number one fan (well, The Freshies' only fan), and managed to get a career out of being the band's only fan. Ironic that the Freshies' fan would be more famous than the Freshies themselves.

Frank once sold a video by mail-order called "Frank's Home Movie Video". He reportedly recorded a personalised intro on each video ordered, and coloured all the sleeves in by hand!

He had many songs released, although all of them are near impossible to get hold of. For example, he released a couple of "Timperley" EPs, where all the tracks contained, er, "Timperley" (it was where he lived, or something). Yes: all of them. Every single one. Other famous releases included "Frank Sings The Magic Of Freddie Mercury and Queen", and the 12" version called "Frank Sings The Magic Of Freddie Mercury And Queen And Kylie Minogue (you know; her off 'Neighbours')". The most memorable tracks being "Frank Gordon" (a version of "Flash Gordon"), and "I Am The Champion" (a version of "We Are The Champions"). He also released a single entitled "Panic by The Sidebottoms", containing no less than nine different mixes of the same song (one of which was the "Demon Axx Warriors from Oblivion Mix"). And John Kettley wasn't the only BBC weatherman to have a song written about him, as Ian McCaskill's name was put to Frank's imaginatively-titled "Ian McCaskill". And we haven't even mentioned "Best of the Answering Machine", "6 All-time Great Footballing Chants (including 'Nil-Nil', 'Wemberley', and 'There's Only One Referee')" or "Frank checks into Auntie Edie's", yet. Or the album "B******s To Christmas"."

Tracks on this side of the album are-


Frank Sidebottom - Medium Play
Posted by Wastedpapiers at 12:19 AM

Fantastic! You know it is, it really is....thank you.

Is there any chance of side 2 as well please? These vinyl releases are really hard to come by... Cheers!

Er, excuse me, but as far I know I am still a member of the Freshies fan club. I joined in 1980 and am No: 403, months before Frank started jumping on stage, so therefore there are at least another 402 of us!

I can see why you like to remain anonymous! Thanks for dropping by and delivering that bombshell N.403.