That'll Be The Day (reposted by request) 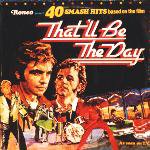 In 1972 David Essex/Ringo Starr made the film "That'll Be The Day" on the Isle of Wight. Billy Fury made a cameo appearance in the movie as "Stormy Tempest", a 50's holiday camp ballroom singer, more or less reflecting his own image from the early days. The movie premiered in West End in April 12th 1973 and was a huge success, as was it's soundtrack album which spent 7 weeks as No. 1 on the charts. The album contained a mixture of oldies together with some specially-recorded material, including 5 tracks by Billy.
This wonky cassette is just half the double LP and has been chewed all down one side hence the poor sound quality. The Viv Stanshall track seems to have recorded o.k. this time despite the tape being a bit chewed up. Stanshall is actually credited with the writing of What In The World (Shoop) that Billy Fury (Stormy Tempest) sings here and I've no Idea who Dante and the Evergreens are? They could even be Billy Fury in a different guise.

Here's a segment from a site about Steve Winwood who does some work on the soundtrack along with many others.

"An article in New Musical Express 10/28/72 described the project: "The film features the music of the times (before the Beatles). The Everly Brothers are seen in the picture, as are Viv Stanshall and Bill Fury who fronts a mythical band of the period. It is this band, known as the Stormy Tempest and the Typhoons, that is creating particular interest because of its star-studded line-up. The personnel is of a flexible nature and Keith Moon, Pete Townshend, Ron Wood, Graham Bond and John Hawkins have already been featured in soundtrack recordings. The NME learns this week that Stevie Winwood and Jack Bruce have now joined this array of musical talents."

The 2-LP soundtrack features three sides of oldies, ironically including Bobby Vee And The Crickets' version of "Well All Right", and one side of new material. The new tracks are credited to David Essex ("Rock On"), Billy Fury ("A Thousand Stars", "Long Live Rock", "That's All Right Mama", "Get Yourself Together", "What Did I Say"), Viv Stanshall ("Real Leather Jacket"), Stormy Tempest ("What In The World (Shoop)"), Eugene Wallace ("Slow Down"), and Wishfull Thinking ("It'll Be Me"). Steve did not appear in the film. To date, the album has only been re-issued on an incomplete bootleg CD. Our assessment is that Steve probably played organ on "That's All Right Mama" and "Get Yourself Together", and possibly piano on Ray Charles' "What Did I Say"."

Danny & The Juniors - At The Hop

Stormy Tempest - What In The World (Shoop)

Billy Fury - Get Yourself Together


These SendSpace files are available for seven days or until exhausted.
Posted by Wastedpapiers at 7:01 AM

thanks for these wastedpapiers but the STORMY TEMPEST track is incomplete. It ends at 1 min 48 not the 2 min 15 it says it is . Have you got a complete version or is there a fault with the file ?

I just listened to it again and it sounds complete to me but the track time is wrong for some reason. Thats how it sounds on the tape anyway- maybe the record version is longer?

Thanks again for these

Can you list the songs and bands/singers on the album - I believe there are 40 songs.

I have been looking for the album for a few years - at a minimum I can build from scratch.

Any chance you could repost the Stormy Tempest song? This song is impossible to find anywhere! Thanks a lot for your help!

I will see what I can do. If I can find it ofcourse - not always easy with boxes of records all over the house in no particular order!

Would be really great
if you could re-upload this song.
I'm helping a friend to find this track. He already searched everywhere and it isn't even possible to buy at Amazon or iTunes.

Thanks a lot in advance!