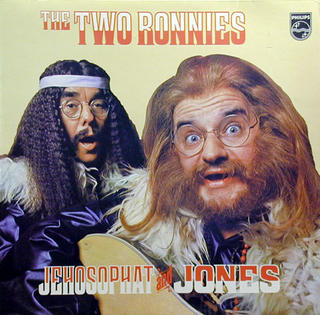 "For sixteen years, big Ronnie Barker and little Ronnie Corbett hit hard on the nation's funny bone with their gently subversive, often wonderfully rude comedy routines, which lampooned countless aspects of British life - pompous authority figures, eccentric middle class guests at dreary cocktail parties, shabby men (with distinctly surreal private lives) putting the world to rights over a beer or ten, ghastly restaurants with rude waiters and incompetent chefs, bumptious politicians, leery rock stars and deeply suspicious doctors. Although often regarded as a "safe" series, The Two Ronnies' best sketches often strayed toward decidedly bizarre and ridiculous Monty Python territory, which isn't surprising as several of the Pythons (together with genius upstarts like Marshall and Renwick) wrote for the series - that's when the great Ronnie Barker wasn't providing the bulk of the material himself under a number of unlikely pseudonyms! (Remember Gerald Wiley? That was him.) The musical numbers can seem dated to modern eyes, but the country and western parodies from 'Big Jim Jehosophat'(Corbett) and 'Fatbelly Jones'(Barker) were always a joy, wrapping dozens of double-entendres around some genuinely catchy tunes, as were the lesser-seen spoofs of Chas and Dave, Status Quo and even Kid Creole and the Coconuts! As with many of the 'old school' comedians, the Two Ronnies' work has endured far better than many of the 'alternative' comedians who tried to push them aside - not only that, they're still being repeated."

The Two Ronnies - Nell Of The Yukon

The Two Ronnies - It Blows My Mind

The Two Ronnies - In The Summertime

The Two Ronnies - Girl From Arkensaw


These SendSpace files are available for seven days or until exhausted.
Posted by Wastedpapiers at 10:39 AM

Thanks for dropping by Rob. Some more Ronnie Barker in the pipeline you'll be glad to know.

Brilliant. I have fond memories of this record from when I was a kid in the 70s. I particularly liked one of the songs you haven't posted called 'Stuttering Bum'.

Thanks Mick. Yes, "Stuttering Bum" is one of my favourites too. Maybe next time.
Ive been enjoying the recent repeats of the Two Ronnies Sketchbook, especially the silly songs at the end.

Oh bugger, Been Looking for "it blows my mind" for 22 years!!.
Since I last saw them do it on the Telle.

Can you PLEASE re-up it.

and in thanks please go to my blog and you will find a rare Alf Garnett 45rpm!!

Thanks Ade. Will see what I can do. Thanks for the link - great blog!