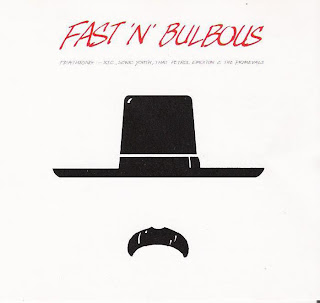 This tribute to Captain Beefheart came out on the Imaginary Records label in the 80's. Bands contributing include XTC, The Scientists, Sonic Youth, The Screaming Dizbusters etc.

"Don Van Vliet (born Don Glen Vliet on January 15, 1941, in Glendale, California, U.S.) is an American musician and visual artist, best known by the pseudonym Captain Beefheart. His musical work was mainly conducted with a rotating assembly of musicians called the Magic Band, which was active from the mid-1960s through to the early 1980s. Van Vliet was chiefly a singer and harmonica player, occasionally playing noisy, untrained free jazz-influenced saxophone and keyboards. His compositions are characterized by their odd mixtures of shifting time signatures and by their surreal lyrics, while Van Vliet himself is noted for his dictatorial approach to his musicians and for his enigmatic relationship with the public.
Van Vliet joined the newly formed Magic Band in 1965, quickly taking over as bandleader. Their early output was rooted in blues and rock music, but Captain Beefheart & His Magic Band (as they were called, collectively) gradually adopted a more experimental approach. 1969 saw the release of their best known album, Trout Mask Replica, which was produced by Van Vliet's childhood friend Frank Zappa and is today regarded as a challenging but groundbreaking and influential masterpiece by some. Van Vliet released several further albums throughout the 1970s, but his group was beset by shifting line-ups and a lack of commercial success. Towards the end of that decade he settled with a group of younger musicians, and his three final albums, released between 1978 and 1982, all received critical acclaim. Van Vliet's legacy is one of limited commercial success, despite a devoted following; however, his influence on later punk and new wave and other genres and musicians has been described as "incalculable"."

The Membranes - Ice Cream For Crow


These SendSpace files are available for seven days or until exhausted.
Posted by Wastedpapiers at 12:26 AM