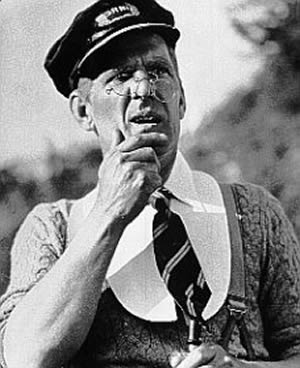 Will Hay still makes me smile despite the ancient jokes and ham acting. I never get tired of watching "Oh , Mr Porter" one of his best films from the 40's.

"Will Hay was born on the 6th December 1888. With his supercilious sniff and overall air of pompous ineptitude, Will Hay was one of the great British character comedians of his time. A former bookkeeper, Hay began his music-hall career in 1909, performing a sketch in which he impersonated a seedy, incompetent schoolmaster.

He was a genius who created a genuinely original persona which worked on a number of variations including the tattered shifty teacher, barrister, prison governor or stationmaster which was perhaps his masterpiece. In whatever circumstances, he was always required to deceive both superiors and inferiors, the latter proving sharper at detecting the radical incompetence beneath his seedy dignity. Accompanied by fat boy Graham Moffitt and toothless old codger Moore Marriott he created a comic oeuvre as endearing and enduring as any in British cinema.

In 1931, Will was elected 'King Rat of the Grand Order of Water Rats', which gave him great pride and a opportunity to acquaint himself better with like-minded fellow artistes within the exclusiveness of the club. The club was a charity organisation who fund raised for the less fortunate. In 1933, Hay applied his astronomical skills and discovered a white spot on Saturn. He published his findings in his 1935 book Through My Telescope. For this achievement, he was made a fellow of the Royal Astronomical Society. He even gets a mention in Patrick Moore's biography.

Running second in popularity only to George Formby at the British box office, in 1940 Hay put his film-making on hold. During the war, his specialist knowledge was so good that he gave up acting to teach astronomy and navigation to the Royal Navy Reserve Special Branch as a Sub lieutenant. One wonders how he could be taken seriously after several years of portraying an exceptionally incompetent teacher.

He worked at Elstree, then Gainsborough, then Ealing; the Gainsborough period was the most consistently successful. Just as Tony Hancock, in some ways a descendant of Hay, would later cut himself off from sidekick Sid James, Hay felt impelled to break up the partnership with Moffatt and Marriott and was, likewise, never quite the same again, although ‘The Goose Steps Out for Ealing’ (1943) was an effective anti-Nazi piece of slapstick. His classic movies include ‘Oh Mr Porter’, ‘Where’s that Fire’ and ‘Ask a Policeman’."


Will Hay - How Tickled I Am


This SendSpace file is available for seven days or until exhausted.
Posted by Wastedpapiers at 12:43 AM

PCL Elite is an oh-so-secret society for the contributors to PCL Linkdump. Basically it's a bunch of guys using a covert group to post a lot of pictures of topless women. Believe me, not as interesting as you might think.

I assumed as much! I don't feel so bad about not being invited now. Thanks baikinange.