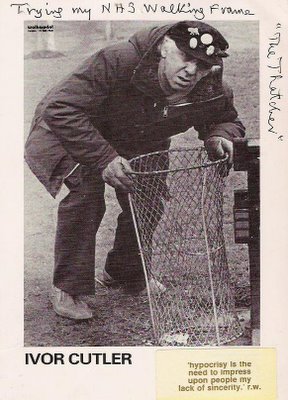 Sad news today that Ivor Cutler passed away last Friday aged 83. We had the pleasure to have tea with him a couple of times about 14 years ago when he was still getting around London on his bicycle despite terrible arthritus in his hands. He was very kind to us. He bought some of Hazel's badges and I think he saw her show of tea leaf inventions at the Royal Festival Hall where he would often go to sign books in the bookshop there. Anyway we got a phone call from him after we sent some badges and postcards and got a nice reply and invite to tea which we duly accepted. He was then living in a tiny and cluttered flat in North London. He treated us to one song on his wheezy harmonium and said " I cant do anymore - my hands seize up!" He gave Hazel some vocal lessons as he was concerned about her Black Country vowels. Also a list of sounds to repeat written on a peice of paper ( we still have it somewhere). The postcard above came around that time. The back is shown below. He was also very kind in phoning up Walker Books to get them to see my illustrations and Hazel's inventions which he thought they would like for the comic they were producing at the time called SNAP which Ivor contributed to on occasion. It was through his intervention that I got my first work in print. He said " People were kind to me when i was first starting out so now I'm helping you."

Lots of Ivor's songs on the web so no need to put any here. Just go to the links at the side and follow your nose. Go out and treat yourself to his records, CD's and wonderful books.

You will find an obituary in the Guardian HERE. 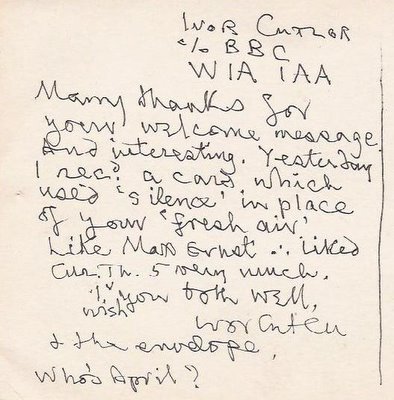 Posted by Wastedpapiers at 2:19 PM

I hadn't heard that he'd died, although I knew he'd been ill for some time. I always loved the work of Ivor Cutler ever since I heard him on John Peel back in 1972. Sad news, indeed.

My only annoyance is that the BBC news website, which is my only regular source of UK news, failed to report this. Considering the number of times he's appeared on BBC radio it's something of an insult.

Yes, it is a shock wwhen someone who seems to have been born middle aged and been around for ever finally goes shuffling off this mortal coil. Why the BBC have ignored this news beats me. They will hopefully make ammends and repeat the lovely documentary about him and his last concert.

ditto yours and spice-the-cats comments. i heard his death announced today (Tuesday 7th)on Radio 4. don't recall hearing a whisper on 1 or 2.
i like your comment, Michael, about being born middle aged and then being around forever. i thought that the fabs had discovered him (and the bonzos) and it wasn't until years later that i found out that he had been around long before them.
a true brit and one who should have a holiday named after him.
i quite fancy celebrating Cutlerday.

One wonders about the Beeb sometimes. All that dumbing down. But they did give Ivor his chance back in the old days when they seemed to have a bit of flair and guts for doing something different and off-the-wall. The only show really that has that spark these days is the Mighty Boosh though I'm sure Ivor would have hated it- far too noisy!