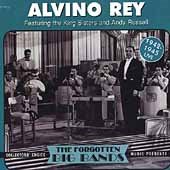 "b. Alvin Henry McBurney, 1 July 1908, Oakland, California, USA, d. 24 February 2004, Salt Lake City, Utah, USA. An accomplished guitarist, Rey learned to play several stringed instruments as a teenager growing up in Cleveland, most notably the banjo. He started his professional career on this instrument in 1927. Rey played guitar with various dance bands, including those of Phil Spitalny, Russ Morgan, Freddy Martin and Horace Heidt, before forming his own band in the winter of 1938/9. With Heidt, Rey had been featured on the steel Hawaiian guitar and also on an early form of electronically amplified guitar. He continued to play guitar in his own band, and also brought from Heidt the vocal group the King Sisters, one of whom, Luise, he married.
Rey toured extensively in the early 40s and eventually became popular with dancers across the USA. His orchestra, which was the house band for Mutual Broadcasting during this period, featured comedy, lots of vocals and highly competent musicianship. All this, allied to the unusual effect Rey created by miking Louise King's vocals through the guitar amplifier, helped to build a following for the band and they enjoyed national hits with "Deep In The Heart Of Texas", "I Said No", and "Strip Polka". "

A cassette I found last week in a charity shop for 60 pence. It would be churlish not to share two tracks here. The King Sisters remind me a bit of the Andrews Sisters.

These You Send It files are available for seven days or until exhausted.
Posted by Wastedpapiers at 11:38 AM