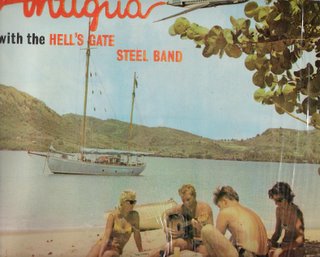 I found this yesterday i the Oxfam shop in Chester. I have a couple of steel band Lp's already and didn't really want anymore but one of the songs caught my eye as it was the name of my son, "Archie". So I bought it and wasn't surprised to find it sounded much like the ones I have already. Nevermind, here are two tracks to give you an idea of what the album sounds like. The rest of the tracks are similar renditions of old favourites like Do Re Me , the old Oscar Hammerstein chestnut and even Handels' Messiah! This is what it says of the liner notes-

"In 1947, when pan music was in it's infancy, the band was formed, with instruments collected from the backyards and dumps. Sp persistent were the members to aquire the new art, that complaints were made to the authorities about the weird sounds made by the group, as they practised and paraded on the streets at night. However, the Govenor, the late Lord Baldwin of Bewdley, championed their cause, and so the HELL'S GATE STEEL BAND was born.
True success for the band came in 1964, when they emerged winners of the Antigua Steel Band Competition. To the amazement of the audience they played Handel's "Hallelujah Chorus". Thier prize was an all expenses paid trip to New York's World Fair."

These You Send It files are available for seven days or until exhausted.
Posted by Wastedpapiers at 2:06 AM

Stange name for a band - unless they play a particular style of Caribbean death metal.

It's the name of one of the islands that make up Antigua.

now that is one band that you won't see appearing on POP IDOL or whatever that other 'reality' show is called. but then again maybe it is time the world had its first boy steel band.