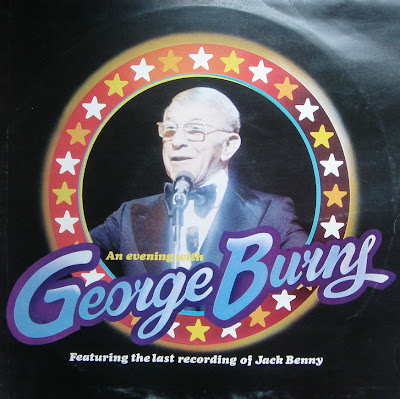 Another of my Llandudno charity shop finds. A live double album from 1974 on the DJM label. Introduced by Jack Benny ( his last recording ). An amusing amalgam of old songs and patter and biography. George talks about his early days of vaudeville and all the different names he used and acts he belonged to. Wikipedia says - "Naftaly (later called Nathan) Birnbaum was the ninth of 12 children born to Louis and Dorah (née Bluth) Birnbaum, Jewish immigrants who had come to the United States from Romania. Burns was also an active member of the First Roumanian-American congregation. His father was a substitute cantor at the local synagogue but usually worked as a coat presser. During the influenza epidemic of 1903, Lippe Birnbaum contracted the flu and died at the age of 47. Nattie (as he was then called) went to work to help support the family, shining shoes, running errands, and selling newspapers. When he landed a job as a syrup maker in a local candy shop at age seven, he was "discovered," as he recalled long after: “ We were all about the same age, six and seven, and when we were bored making syrup, we used to practice singing harmony in the basement. One day our letter carrier came down to the basement. His name was Lou Farley. Feingold was his real name, but he changed it to Farley. He wanted the whole world to sing harmony. He came down to the basement once to deliver a letter and heard the four of us kids singing harmony. He liked our style, so we sang a couple more songs for him. Then we looked up at the head of the stairs and saw three or four people listening to us and smiling. In fact, they threw down a couple of pennies. So I said to the kids I was working with, 'no more chocolate syrup. It's show business from now on'. We called ourselves the Pee-Wee Quartet. We started out singing on ferryboats, in saloons, in brothels, and on street corners. We'd put our hats down for donations. Sometimes the customers threw something in the hats. Sometimes they took something out of the hats. Sometimes they took the hats. ” Burns quit school in the fourth grade to go into show business full-time. Like many performers of his generation, he tried practically anything he could to entertain, including working with a trained seal, trick roller skating, teaching dance, singing, and adagio dancing in small-time vaudeville. During these years, he began smoking cigars and later in his older years was characteristically known as doing shows and puffing on his cigar. He adopted the stage name by which he would be known for the rest of his life. He claimed in a few interviews that the idea of the name originated from the fact that two star major league players (George H. Burns and George J. Burns, unrelated) were playing major league baseball at the time. Both men achieved over 2000 major league hits and hold some major league records. Burns also was reported to have taken the name George from his brother Izzy (who hated his own name so he changed it to "George"), and the Burns from the Burns Brothers Coal Company (he used to steal coal from their truck). He normally partnered with a girl, sometimes in an adagio dance routine, sometimes comic patter. Though he had an apparent flair for comedy, he never quite clicked with any of his partners, until he met a young Irish Catholic lady in 1923. "And all of a sudden," he said famously in later years "the audience realized I had a talent. They were right. I did have a talent—and I was married to her for 38 years." George Burns - Side One
Posted by Wastedpapiers at 6:58 AM

Are you going to do side two?

Please tell me that there are plans for the other 3 sides to be showing up on your blog..... George was old and funny when I was growing up... now I'm old and he's just as funny and entertaining.

Thanks for the interest gregg. I have no plans to upload the other three sides for the time being. Maybe in a the future when I have more time.