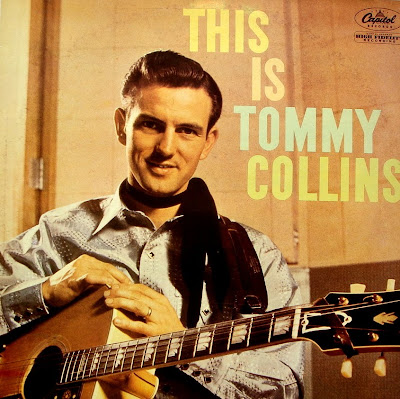 An LP on the Capitol label from 1984 but original recordings from 1959. Found at car boot the other day in Frodsham. I'd not heard of Tommy Collins before I must admit but pleasantly surprised by the overall sound which reminds me of Hank Williams and several other artistes of that era when country music had that hillbilly swing.

"Leonard Raymond Sipes (September 28, 1930 – March 14, 2000), better known as Tommy Collins, was an American country music singer and songwriter.
Active primarily during the 1950s through 1970s, Collins was instrumental in helping create the Bakersfield sound of the country music genre. He enjoyed a string of hits during the mid-1950s including "It Tickles" and "Watcha Gonna Do Now". He also wrote several songs for other artists, including "If You Ain't Lovin' (You Ain't Livin')", which was a top 10 hit for Faron Young in 1954 and a No. 1 hit by George Strait in 1988.
After several years in the ministry, Collins returned to recording. In 1965, he had a comeback hit with "If You Can't Bite, Don't Growl". In the 1970s, he wrote several hits for Merle Haggard, including the No. 1 hits "Carolyn" and "The Roots of My Raising". In 1981, Haggard recorded a biographical tribute to Collins called "Leonard".
Collins was the inspiration and character talked about in Craig Morgan's song, "I Wish I Could See Bakersfield"
Collins remained active in the songwriting business. He died March 14, 2000, in Ashland City, Tennessee."


Tommy Collins - Side One
Posted by Wastedpapiers at 2:13 AM

Many thanks...
There is a whole bunch of great country songs out there by Tommy Collins...
There is quite a few really funny novelty songs by him too...