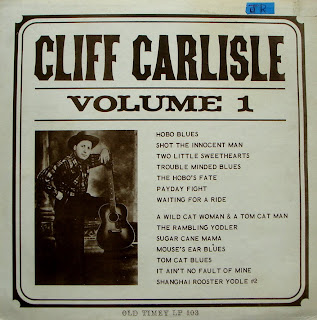 Another from the recent boot sale batch. On the Old Timey label from 60's I imagine, though songs recorded back in the 30's. Similar to Tommy Collins but more yodelling and exceptional steel guitar.

"Carlisle was born in Taylorsville, Kentucky and began performing locally with cousin Lillian Truax at age 16. Truax's marriage put an end to the group, and Carlisle began playing with Wilber Ball, a guitarist and tenor harmonizer. The two toured frequently around the U.S. playing vaudeville and circus venues in the 1920s.
Carlisle and Ball first played at Louisville, Kentucky radio station WHAS-AM in 1930, which made them local stars, and later that year they recorded for Gennett Records and Champion Records. In 1931, they recorded with Jimmie Rodgers. Toward the end of 1931, Carlisle signed with ARC and was offered performance slots on several radio stations, including WBT-AM in Charlotte, North Carolina, WLS-AM in Chicago and WLW-AM in Cincinnati, Ohio. Cliff's brother Bill became his guitarist after Ball left in 1934. During the 1930s Carlisle, who recorded a large amount of material despite a hiatus from 1934 to 1936, frequently released songs with sexual connotations including barnyard metaphors (which became something of a hallmark).
Carlisle toured with his son, "Sonny Boy Tommy," to occasional consternation from authorities in areas where this contravened local child labor laws. He continued to perform on WMPS-AM in Memphis, Tennessee for several years in the 1940s, but by the 1950s had retired from music.
In the 1960s, The Rooftop Singers covered his tune "Tom Cat Blues"; in its wake, Carlisle and Ball did a few reunion shows together and recorded for Rem Records. On April 2, 1983, Carlisle died at the age of 79 in Lexington, Kentucky."


Cliff Carlisle - Side One
Posted by Wastedpapiers at 2:38 AM