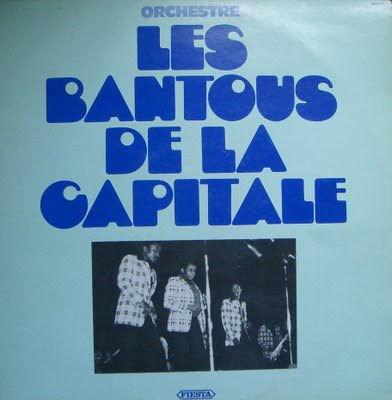 The Bantous from a Fiesta label LP released in 1978.

"Les Bantous de la Capitale is one of the longest-lasting and most influential groups in the musical history of the Congo (now Democratic Republic of the Congo). Formed in 1959, the band played a major role in the introduction and growing popularity of boucher, which vitalized the Cuban-influenced rumba, and soukous. Initially co-led by saxophonists Dieudonne "Nino" Malapet and Jean Serge Essous, Les Bantous de la Capitale made their mark with a series of dance-inspiring singles that are reprised on the three-CD collection Les Merveilles Du Passe. Les Bantous de la Capitale has withstood several personnel changes. When Essous elected to remain in Paris after recording with the group, Malapet assumed leadership. Despite geographical obstacles, Essous has continued to perform with the band. Although the Congolese government's issuing of an official cultural policy, Authenticit '67, resulted in the loss of several musicians, substitutes were found and Les Bantous de la Capitale has continued to tour and record. Singers have included Kosmos Kapitza, Pamelo Mounk'a, and Tchico Tchicaya. Guitarists have included former Franco & Ok Jazz member Nedule Papa Noel and Samba Mascott. Les Bantous de la Capitale can be found on solo albums by Mascott, Mounk'a, and Essous."


These SendSpace files are available for seven days or until exhausted.
Posted by Wastedpapiers at 11:46 AM