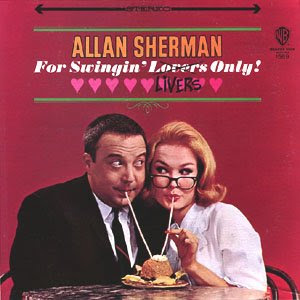 Found this 1964 LP by Allan Sherman at the roadside bookstall in All Saints in Manchester at the weekend. A few good novelty songs based on old standards given a Jewish twist. The only thing that spoils it for me is the canned laughter and applause on each track.

"Employed as a producer by Mark Goodson-Bill Todman Productions, Sherman was the creator and original producer of the popular I've Got a Secret from 1952 to 1958. During this time, he recorded a 78RPM single, containing A Satchel And A Seck (to "A Bushel And A Peck" from Guys And Dolls, and Jake's Song. This single sold poorly and, when time came to write his autobiography, Sherman didn't even acknowledge it. He also produced a short-lived 1954 game show, What's Going On? Sherman was fired after a particularly unsuccessful episode of I've Got a Secret featuring Tony Curtis that aired June 11, 1958. But later, after becoming a celebrity himself, Sherman would make some return appearances on the program.

Later, he found that the little song parodies he performed to amuse his friends and family were taking a life of their own. Sherman had the good fortune to live in the Brentwood section of West Los Angeles next door to Harpo Marx, who invited Sherman to perform his song parodies at parties attended by Marx's show-biz friends. After one such party, George Burns phoned a record executive and persuaded him to sign Sherman to a contract. The result was an LP of these parodies, My Son, the Folk Singer, in 1962. The album was so successful that it was quickly followed by My Son, the Celebrity.

In 1962, capitalizing on his success, Jubilee Records re-released the 1951 single on the album More Folk Songs by Allan Sherman and His Friends, which was a compilation of material by various Borscht Belt comedians, such as Sylvia Froos, Fyvush Finkle and Lee Tully, along with the Sherman material.

As suggested by the albums' titles, Sherman's first two LPs were mainly Jewish-folk-culture rewritings of old folk tunes. His first minor hit was "Sarah Jackman" (pronounced "Jockman"), a takeoff of "Frère Jacques" in which he and a woman (Christine Nelson) exchange family gossip ("Sarah Jackman, Sarah Jackman, How's by you? How's by you? How's by you the family? How's your sister Emily?" etc.) By his peak with My Son, the Nut in 1963, however, Sherman had broadened both his subject matter and his choice of parody material and begun to appeal to a larger audience.

Sherman wrote his parody lyrics in collaboration with Lou Busch. A few of the Sherman/Busch songs are completely original creations, featuring original music as well as lyrics, rather than new lyrics applied to an existing melody. The Sherman/Busch originals — notably "Go to Sleep, Paul Revere" and "Peyton Place" — are delightful novelty songs, showing genuine melodic originality as well as deft lyrics."


These SendSpace files are available for seven days or until exhausted.
Posted by Wastedpapiers at 3:22 AM

Hi. I have a blog (PageRank 4). I would like to exchange links (A->B C->A) with your site ( bootsalesounds blogspot com ). Are you interested? Remember to quote this text in your answer (my e-mail: eerie[at]go2.pl ). Then remove this comment.