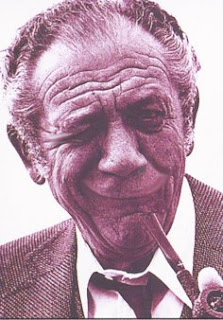 That dirty laugh, the bag of spanners features, star of many Carry Ons and foil for Hancock in Hancock's Half Hour. Another profile of a great british character actor.

"James was born Joel Solomon Cohen, to Jewish parents, later changing his name to Sidney Joel Cohen and then Sid James, in a peculiar quirk of fate on Hancock Street, Hillbrow, Johannesburg, South Africa. He worked as a diamond cutter, hairdresser, dance tutor and reputedly a part-time boxer in fairgrounds, before becoming a professional actor.
It was at a hairdressing salon in Kroonstad, Orange Free State that he met his future wife. He married Berthe Sadie Delmont, known as Toots on 12 August 1936 and her father Joseph Delmont, a wealthy Johannesburg businessman, bought a salon for James. Within a year, however, James announced that he wanted to become an actor and joined Johannesburg Repertory Players. Through this he got work with the South African Broadcasting Corporation.
He and Delmont divorced in 1940 mainly as a result of James's many relationships with other women; it was a pattern that continued throughout his life. In 1943, he married a dancer, Meg Sergei, née Williams (born 1913). They divorced on 17 August 1952. On 21 August that year he wed Valerie Elizabeth Patsy Assan (born 1928), an actress who used Ashton as her stage name. During their marriage, he had a well publicised affair with his Carry On co-star, Barbara Windsor.
During the Second World War, he became a lieutenant in the South African Army in an entertainment unit, and subsequently took up acting as a career. He came to Britain in 1946 on the back of his service gratuity. Initially he worked in repertory before being spotted by the nascent British post-war film industry."


This SendSpace files is available for seven days or until exhausted.
Posted by Wastedpapiers at 12:58 PM

Hi Michael Small world I love Sid James, my son and i have all the Carry ons and more to boot i just decided to Google and find a bio when i found you had Blogged him !! How was Norway ? Paul moore

HI Paul, thanks for dropping by. My favourite Carry On is the horror spoof C O Screaming but I dont think Sid is in that.

Norway was great and not as cold as we imagined it would be in January. Even the Norwegians were saying it was mild- usually they expect it be well below the zero mark. Read more on Flobberlob.