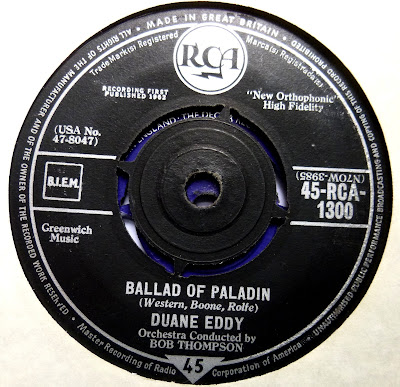 Another single from today's boot sale in a wet field. From 1962 on the Decca label. Duane's guitar style is very memorable. This was a minor hit I think in the UK- not as big as Peter Gunn , Rebel Rouser and some of the others who's names escape me for the moment. Wikipedia says - "Born in Corning, New York, he began playing the guitar at the age of five. In 1951 his family moved to Tucson, and then toCoolidge, Arizona. At the age of 16 he obtained a Chet Atkins model Gretsch guitar, and formed a duo, Jimmy and Duane, with his friend Jimmy Delbridge (who later recorded as Jimmy Dell). While performing at local radio station KCKY they met disc jockey Lee Hazlewood, who produced the duo's single, "Soda Fountain Girl", recorded and released in 1955 in Phoenix. Hazlewood then produced Sanford Clark's 1956 hit, "The Fool", featuring guitarist Al Casey, while Eddy and Delbridge performed and appeared on radio stations in Phoenix before joining Buddy Long's Western Melody Boys, playing country music in and around the city. Eddy devised a technique of playing lead on his guitar's bass strings to produce a low, reverberant "twangy" sound. In November 1957, Eddy recorded an instrumental, "Movin' n' Groovin'", co-written by Eddy and Hazlewood. As the Phoenix studio had no echo chamber, Hazlewood bought a 2,000 gallon water storage tank which he used as an echo chamber to accentuate the "twangy" guitar sound. In 1958, Eddy signed a recording contract with Lester Sill and Lee Hazlewood to record in Phoenix at the Audio Recorders studio. Sill and Hazlewood leased the tapes of all the singles and albums to the Philadelphia-based Jamie Records. "Movin' n' Groovin'" reached number 72 on the Billboard Hot 100 in early 1958; the opening riff, borrowed from Chuck Berry's "Brown Eyed Handsome Man," was itself copied a few years later by The Beach Boys on "Surfin' U.S.A.". For the follow-up, "Rebel 'Rouser", the record featured overdubbed saxophone by Los Angeles session musician Gil Bernal, and yells and handclaps by doo-wop group The Rivingtons. The tune became Eddy's breakthrough hit, reaching number 6 on the Billboard Hot 100 chart. It sold over one million copies, earning Eddy his first gold disc. Eddy had a succession of hit records over the next few years, and his band members, including Steve Douglas, saxophonist Jim Horn and keyboard player Larry Knechtelwould go on to work as part of Phil Spector's Wrecking Crew. According to writer Richie Unterberger, "The singles - 'Peter Gunn,' 'Cannonball,' 'Shazam,' and 'Forty Miles of Bad Road' were probably the best - also did their part to help keep the raunchy spirit of rock & roll alive, during a time in which it was in danger of being watered down." On January 9, 1959, Eddy’s debut album, Have 'Twangy' Guitar Will Travel, was released, reaching number 5, and remaining on the album charts for 82 weeks. Eddy's biggest hit came with the theme to the movie Because They're Young in 1960, which featured a string arrangement, and reached a chart peak of number 4 in America and number 2 in the UK in September 1960. It became his second million selling disc.[1] Eddy's records were equally successful in the UK, and in 1960, readers of the UK's NME voted himWorld's Number One Musical Personality, ousting Elvis Presley. In 1960 Eddy signed a contract directly with Jamie Records, bypassing Sill and Hazlewood. This caused a temporary rift between Eddy and Hazlewood. The result was that for the duration of his contract with Jamie, Eddy produced his own singles and albums. "Duane Eddy and the Rebels" became a frequent act on The Dick Clark Show." Duane Eddy - Ballad Of Paladin Duane Eddy - The Wild Westerner
Posted by Wastedpapiers at 5:18 AM

Palladin was the name of the character in a popular western TV series. I think the series was called "Have Gun Will Travel." All those westerns looked the same to me as a kid, so I might be fuzzy on the details.