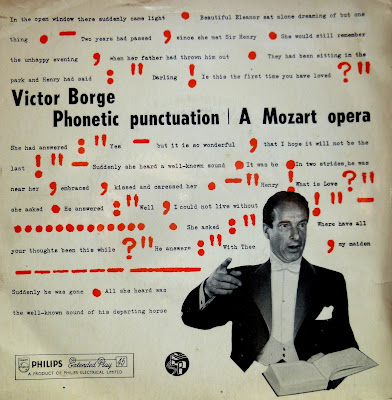 I have featured Victor Borge before I think a few years back so about time for another - this time from an EP kindly sent by a friend.  It is a bit scratchy and jumps on the first side sadly but hopefully won't deter from the amusement generated.

Wikipedia says  -  “Borge was born Børge Rosenbaum in Copenhagen, Denmark, into a Jewish family. His parents, Bernhard and Frederikke (Uchtinger) Rosenbaum, were both musicians—his father a violist in the Royal Danish Orchestra and his mother a pianist.Like his mother, Borge began piano lessons at the age of two, and it was soon apparent that he was a prodigy. He gave his first piano recital when he was eight years old, and in 1918 was awarded a full scholarship at the Royal Danish Academy of Music, studying under Olivo Krause. Later on, he was taught by Victor Schiøler, Liszt's student Frederic Lamond, and Busoni's pupil Egon Petri.

Borge played his first major concert in 1926 at the Danish concert-hall Odd Fellow Palæet (The Odd Fellow's Lodge building). After a few years as a classical concert pianist, he started his now famous "stand up" act, with the signature blend of piano music and jokes. He married American Elsie Chilton in 1933, the same year he debuted with his revue acts.Borge started touring extensively in Europe, where he began telling anti-Nazi jokes.
When the Nazis occupied Denmark during World War II, Borge was playing a concert in Sweden, and managed to escape to Finland.He traveled to America on the USS American Legion, the last neutral ship to make it out of Petsamo, Finland, and arrived 28 August 1940, with only $20 (about $333 today), with $3 (about $49.99 today) going to the customs fee. Disguised as a sailor, Borge returned to Denmark once during the occupation to visit his dying mother.

Even though Borge did not speak a word of English upon arrival in America, he quickly managed to adapt his jokes to the American audience, learning English by watching movies. He took the name of Victor Borge, and, in 1941, he started on Rudy Vallee's radio show,but was hired soon after by Bing Crosby for his Kraft Music Hall program.
From then on, fame rose quickly for Borge, who won Best New Radio Performer of the Year in 1942. Soon after the award, he was offered film roles with stars such as Frank Sinatra (inHigher and Higher). While hosting The Victor Borge Show on NBC beginning in 1946, he developed many of his trademarks, including repeatedly announcing his intent to play a piece but getting "distracted" by something or other, making comments about the audience, or discussing the usefulness of Chopin's "Minute Waltz" as an egg timer.He would also start out with some well-known classical piece like Beethoven's "Moonlight Sonata" and suddenly move into a harmonically suitable pop or jazz tune like Cole Porter's "Night and Day" or "Happy Birthday to You".

Victor Borge  -  Mozart Opera
Posted by Wastedpapiers at 9:05 AM