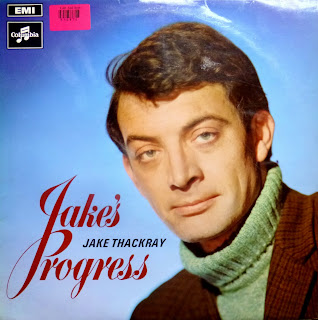 The master of drollery and sly humour from an LP on the EMI label from 1969.  Reminds me of Paddy Roberts and singer songwriters of that ilk.


Wikipedia says  -  John Philip "Jake" Thackray (27 February 1938 – 24 December 2002), was an English singer-songwriter, poet and journalist. Best known in the late 1960s and early 1970s for his topical comedy songs performed on British television, his work ranged from satirical to bawdy to sentimental to pastoral, with a strong emphasis on storytelling, making him difficult to pigeonhole.
Jake Thackray sang in a lugubrious baritone voice, accompanying himself on a nylon-strung guitar in a style that was part classical, part jazz. His witty lyrics and clipped delivery, combined with his strong Yorkshire accent and the northern setting of many of his songs, led to him being described as the "North Country Noël Coward", a comparison Thackray resisted, although he acknowledged his lyrics were in the English tradition of Coward and Flanders and Swann, "who are wordy, funny writers". However, his tunes derived from the French chansonniertradition: he claimed Georges Brassens as his greatest inspiration, and he was also influenced by Jacques Brel and Charles Trenet.He also admired Randy Newman."

Jake Thackray  -  Side One
Posted by Wastedpapiers at 1:46 AM

It is pretty rubbish but like i said - I have no idea how to change it. Hoping some bright spark would explain how to copy and paste and not get this happening!?

Try copying, then pasting into Word as paste - special - text only. Then copy the result and paste into blog. Might work.

Thanks Mike. I will give it a go !

And he looked like Mr.Bean in a bad wig.