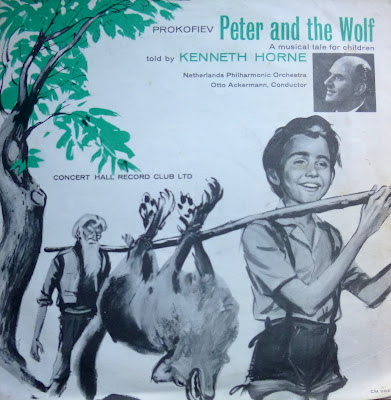 A 10" LP I found today at a boot sale. On the Concert Hall record label from 1962. Kenneth Horne is better remembered as the amusing a genial host of radio's Round The Horne which featured Kenneth Williams, Hugh Paddick and Betty Marsden etc. in the 60's. Interesting to hear him here narrating this tale set to the music of Prokofiev which I always thought was tinged with a certain undefinable melancholy. One can't help thinking - any minute now Rambling Syd Rumpo will appear to spoil the mood and regale us with a Swoggler's Nadgering Song! Wikipedia says - "Kenneth Horne (27 February 1907 – 14 February 1969) was an English comedian and businessman. The son of a clergyman and politician, he combined a successful business career with regular broadcasting for the BBC. His first hit series, Much-Binding-in-the-Marsh, written with his co-star Richard Murdoch, arose out of his wartime service as an officer in the Royal Air Force. Ill health forced him to choose between commerce and show business after 1958, and, choosing the latter, he made two further popular radio series, Beyond Our Ken (1958–1964) and Round the Horne (1965–1968) Charles Kenneth Horne was the seventh and youngest child of Charles Silvester Horne and his wife, the Hon. Katherine neé Cozens-Hardy. Silvester Horne was a Congregationalist minister, Liberal MP for Ipswich, and powerful orator. His maternal grandfather was Herbert Cozens-Hardy, the Liberal MP for North Norfolk who became both the Master of the Rolls and Baron Cozens-Hardy on 1 July 1914. Horne was educated at a preparatory school in Shrewsbury, followed by St George's School, Harpenden and the London School of Economics. His tutors at the LSE included Hugh Dalton and Stephen Leacock. Horne was dissatisfied there, and through the generosity of an uncle, Austin Pilkington of the Pilkington glassmaking family of St Helens, he was enabled to go instead to Magdalene College, Cambridge. He represented the university at tennis, partnering Bunny Austin, but was academically undistinguished and so neglectful of his studies that he was sent down in 1927. Austin Pilkington was aggrieved at Horne's failure to make the most of the opportunity he had provided, and he decided against offering him a post in the family firm. However, through his contacts within the industry, he secured for the young Horne an interview with the Triplex Safety Glass Company at King's Norton, a district of Birmingham. Horne's sporting record commended him to the manager of the Triplex factory, and he was taken on as a management trainee on a very modest salary. In 1930, despite his unimpressive finances, he married Lady Mary Pelham-Clinton-Hope, daughter of the 8th Duke of Newcastle. The marriage was happy at first, but they were sexually incompatible. His wife left him and returned to her family home. The marriage was annulled in 1933 on the grounds of non-consummation, although the two remained on friendly terms thereafter. When Horne's first marriage was dissolved, he was sought out by a former girlfriend, Joan Burgess, daughter of a neighbour at King's Norton. Unlike his first wife, she had much in common with him, including a liking for squash, tennis and golf and for dancing. A month before her 21st birthday they were married, in September 1936." Peter & The Wolf - Side One. Peter & The Wolf - Side Two
Posted by Wastedpapiers at 9:02 AM

Thanks for telling me all that, as I was brought up in Kings Norton, went to KN Grammar school and even considered a job at Triplex as a graduate apprentice. I was gobbled up however by GEC and did my graduate training with them.
I still have a huge collection of "Round the Horne" tapes and a few of "Beyond our Ken".
All great listening.
By the way - I am one of these people carting loads of old LP's down to the charity shops. My brothers keep telling me I should sell them on ebay! I'm getting too old for all this hassle - although I did keep one back when I heard (on't web) of someone who said he would give £50 for a copy of an LP that I had. (folk music).
Cheers....Bernard

Thanks for the positive comment Bernard - always welcome! I can't be bothered with eBay either but keeping hold of my records for the time being. Round The Horne is a classic and still makes me laugh.

Unfortunately no longer available. Any chance of a reup?

Maybe Sam, if I can find it!

I found it and it's re-upped!