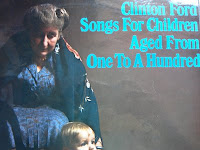 An Lp on the cheapo Marble Arch label from 1969 , distributed by Pye records. A compilation of children's songs. Nice versions of old novelties like Aba-daba Honeymoon and The Oyster Song.

"Clinton Ford, whose real name was George Harrison strangely enough was born in 1931 in Salford near Manchester in the North West of England.
"Clinton will now be best remembered for his novelty song, "Fanlight Fanny"- a recording he made while he was with Oriole, a minor label which had association with the Woolworth's budget record brand, 'Embassy'. In fact Clinton Ford was one of Oriole's most successful artists for a while, and "Fanlight Fanny" looked like Clinton's break into the big time. Sadly, it never quite happened. 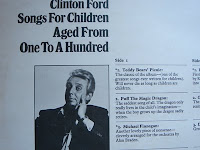 Clinton Ford - Oh Dear What Can The Matter Be

Clinton Ford - What Noise Annoys An Oyster
Posted by Wastedpapiers at 9:40 AM

I've been after "What noise annoys an oyster" for yonks. Brilliant stuff, thank you so much!