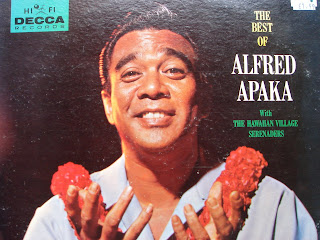 Found recently in a charity shop in Chester for a couple of quid. A double LP of his best songs for the Decca label - released after his death in 1960's. A bit too MOR for my taste but I was drawn to the "exotica" elements and particularly to the song "Princess Poo-Poo-Ly Has Plenty Of Papaya".

"Alfred Aloha Apaka (1919 -- 1960) was one of the influential performers in the history of Hawaii's popular music. Although he recorded for less than a decade, Apaka set the standards for modern Hawaiian music with his joyful, baritone vocals and highly entertaining performances. In his book, Hawaiian Music and Musicians, George Kanahele wrote that Apaka was "the possessor of one of the most remarkable voices to come out of Hawaii. A natural, untrained, voice, it was strong, masculine and agile.....a delicate instrument that could range from B flat to E in pianissimo." Apaka inherited his musical skills from his great aunt, Lydia Ahola, the daughter of Queen Lilioukalani. In an interview with The Honolulu Sun Bulletin, Apaka's son, Jeff, who also became an entertainer, said, "I like to think that Dad's musical training came in a direct line from the queen." During the '40s, Apaka performed with several orchestras including Don McDiamond's Royal Hawaiian Hotel house band and Ray Kenney's band in New York. Overheard by Bob Hope while singing at a luau in Honolulu, Apaka became a regular guest on Hope's radio and television shows. Although many predicted that he would become a successful mainstream vocalist, Apaka took a different route when he convinced multimillionaire Henry Kaiser to build a hotel, The Hawaiian Village, that included a showroom where he starred in his own extravagant revue. Apaka's energetic performances soon made the hotel an essential tourist attraction, and his popularity continued to grow. Plans for a nationally broadcast television special were finalized in February 1960. A few days later, however, Apaka suffered a fatal heart attack while playing hand ball."

Alfred Apaka - You Are Beautiful

Your blog is ranked 333 on ComicsBlips.com


We’d like to invite you to ComicsBlips.com, where we are dedicated to highlighting the best Web Marketing content on the Web every day.

ComicsBlips is new, but our Blips network of sites has a proven track record, sending millions of visits per month to sites just like yours.

Claiming your blog makes it easier for you to submit your posts, helping boost your blog’s exposure.

We hope you enjoy ComicsBlips.com. If you have questions about the blog-claiming process or feedback on our site, we’d love to hear from you.

I would love to download this and any other Alfred Apaka albums you have because I love his music! How do I download this?

Thanks Duke- just click onthe song titlesabove and it will take you to mediaFire where you can download the track.