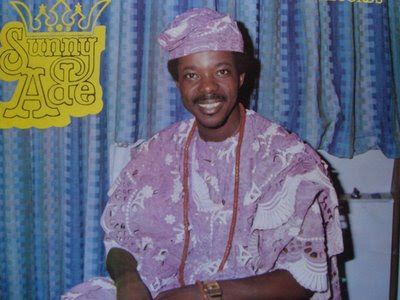 I can't believe I haven't uploaded any King Sunny Ade sides before as I have several of his LP's - mostly released in Africa. He was picked up by Island Records in the 80's for a brief period but soon fell out of favour despite the success of other "world music" artistes such as Salif Keita and Youssou N'Dour etc.
This LP on his own Sunny Alade Records label from the 80's is a good taster of ju ju music at that time and features some wonderful lap steel guitar and talking drums.
I saw him at his first? London concert around 1987 at the Hammersmith Odeon and he and his band were truly wonderful - the live experience far superior to the records.

"Born to a Nigerian royal family in Ondo, Adé left grammar school to pursue his career, which began with Moses Olaiya's Federal Rhythm Dandies, a highlife band. He left to form The Green Spots in 1967. He formed a record label in 1974, fed up with being exploited by a major label. After the death of Bob Marley, Island Records began looking for another third world artist to put on its contract and Fela Kuti was just signed to Arista Records. Producer Martin Meissonnier introduced King Sunny Adé to Chris Blackwell, leading to the release of Juju Music in 1982. Many music afficianados are quick to point out that Sunny Ade's brand music of Juju could not be ignored by anyone at the time, and they were not surprised that Chris and his crew decided to launch an attack on the world music scene with a very brillian artist such as Ade. Any first timer that listens to Sunny Ade's brand of Juju music will be attracted to the rhythm section. Till today, this seminal recording is often acclaimed to be one of the most important records in Africa. Adé gained a wide following with this album and was soon billed as "the African Bob Marley". Sunny Adé headlined concerts in the United States. The New York Times' Robert Palmer described one of Adé's several concerts in New York in the 1980s as one of the most significant pop music events of the decade[citation needed] and Ade as "one of the world's great band leaders"[1] His second album under the cusp of international stardom was Synchro System which attracted many converts of world music and it deservedly earned him a grammy nomination in the folk/ethic music category. Soon after, Nigerian imports (mostly pirated copies) of his massive back catalog began flooding the Western market. Island, concerned about sales and Adé's refusal to include more English in his repertoire, cut him loose after his third LP, 1984's Aura which featured Stevie Wonder on the harmonica. Sunny Ade has said in the past that his refusal to allow Island to meddle with his compositions and over-Europeanise and Americanise his music were the reasons why Island decided to look elsewhere.

In 1984, he and his music were featured in Robert Altman's comedy film O.C. & Stiggs His music was also featured in one of Richard Gere's movie "Breathless".

By the end of the 1980s, Adé released several albums in his native Nigeria. He continued to garner critical acclaim and widespread popularity in Africa. He featured prominently in Manu Dibango's 1994 star studied "WAKAFRIKA" album."